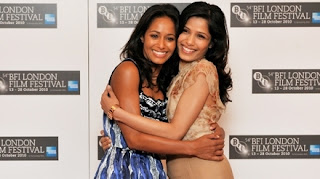 Julian Schnabel's latest feature, MIRAL, is a deeply frustrating movie. There's a brilliantly tense ticking bomb scene intercut with Roman Polanski's REPULSION; Schnabel's trademark fluid handling of the camera; and somewhere underneath the soap-opera-bad romance there's a genuinely fascinating drama. But man, does it get swallowed up by the hammy dialogue and piss-poor acting that surrounds it.
The movie is set in post-WW2 Jerusalem. Hiam Abbas plays Hind Husseini - the real life educator who sacrificed her personal life and wealth to run an orphanage/school for Palestinian refugees. Her struggle to keep her orphanage is lightly sketched in with a few comments and a rather redundant cameo from Willem Dafoe. Her story is the movie I would have wanted to see. What in her childhood gave her the fortitude and integrity to sacrifice her life? How did she navigate the slippery local politics and raise the money necessary? How did she really feel about never marrying?
The problem is that her story is down-played in favour of the story of Miral - one of her pupils. Miral is the daughter of a deeply emotional disturbed mother (Yasmine Al Massri in a very strong cameo performance) and a sympathetic but floundering father (Alexander Siddig). He places Miral in the school, trying to protect her from radical politics and danger. But as Miral becomes a teenager, she gets radicalised by seeing a village bull-dozed. This could have set us up for a fascinating drama playing off emotions against intelligence - and the very real and important choice between overt action and the longer game. But Rula Jebreal's script (she is the real-life Miral) keeps giving us glimpses of something interesting - say Miral's friendship with a Jewish girl - but refuses to explore it, reverting back to soap opera dialogue and emotional.
So, what do we have in the end? A movie that is a joy to behold, thanks to Schnabel's fluid camera and talent for capturing light - a movie that is earnest in its intentions - but ultimately one that is marred by the fact that it has cast an Indian girl who can't act in the central role, and its incredibly poor script.
MIRAL played Venice and Toronto 2010. It opens in Germany on November 18th and in the UK on December 3rd. It opens in the USA on March 25th.
Posted by Bina007 at 23:00