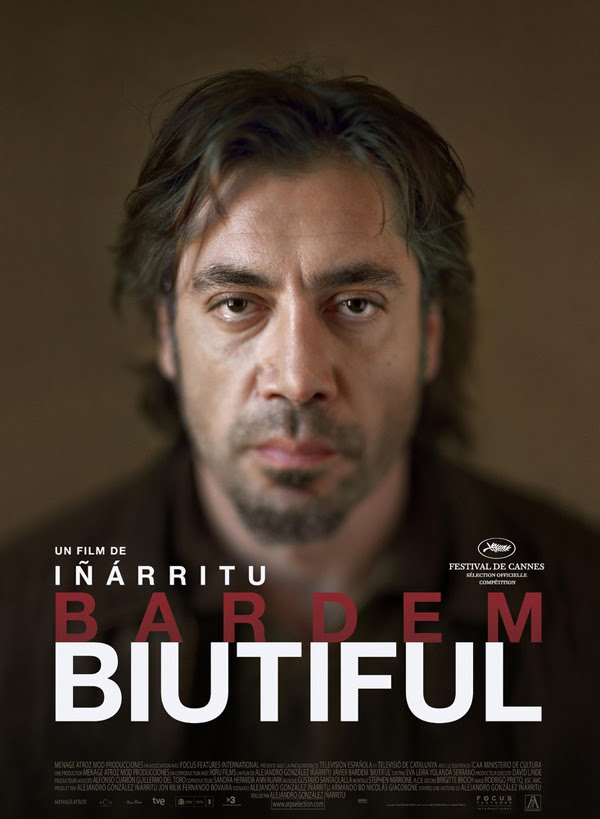 Alejandro González Iñárritu's last film, BABEL, prompted one of the most excoriating reviews published on this site, as guest reviewer Nikolai, mocked its pomposity and pretension.  I was completely in agreement: it seems to me that ever sense his breathtakingly raw and powerful debut, AMORES PERROS, Iñárritu has done little more than create boring, overly-complicated, emotionally sterile films - beautifully shot maybe - but turgid and unwatchable.  Sadly, BIUTIFUL is no exception to this rule. Watching it feels like being in a lecture hall with a dusty old professor explaining why his theory is very, very clever, and earth-shatteringly important, and achingly sad.  As the minutes pass you get more and more resentful and start wishing for something altogether less earnest and more, well, entertaining.  And the tragedy is that Iñárritu is wasting his talent - his talent for creating arresting visuals, for being totally in control of the screen - and wasting Javier Bardem's talent too. For Bardem, arguably the finest Spanish language actor working today, and one of the best in any language, turns in an award-worthy performance in the lead role.  But to what end?
Bardem plays a man called Uxbal - a man dying of cancer, with little time left and many problems to solve. He is father to two children, still in love with their mother, but unable to trust her with their care given that she is an alcoholic.  So, he tries to amass a small amount of money in order to bribe a seeming stranger into caring for them after he has died. In order to do this, he exploits his gift of people able to speak to the dead, and cuts so many corners in his job as middle man for a gang of Chinese sweatshop owners, that he puts others lives at risk.  The moral quagmire is real and Bardem beautifully portrays a man feeling guilty for selfishly trying to protect his kids - and at the same time knowing that his attempts are essentially futile.  And as the movie grinds into its final stages, we should be moved to tears by his children's plight.  The problem is that our senses are deadened by the socio-political hectoring of the director - Iñárritu's pathological need to inspire liberal angst at the dangerous lives of illegal immigrants and children raised in poverty.  He wants us to feel, but ends up turning us off. And that is the greatest tragedy of all.
BIUTIFUL played Cannes, Telluride, London and Toronto 2010. It was released in 2010 in France, Mexico, Norway, Sweden, Spain, Israel, Denmark and the USA. It is currently on release in Greece, Brazil and Finland and opens this weekend in the UK, Turkey and Portugal. It opens on February 4th in the Czech Republic, Estonia and Italy. It opens on February 9th in Indonesia; on March 10th in Germany and on March 18th in Iceland. It was nominated for a Golden Globe for Best Foreign Language film but lost. It has also been nominated for an Oscar for Best Foreign Language film and Javier Bardem has been nominated for Best Actor.
Posted by Bina007 at 23:16