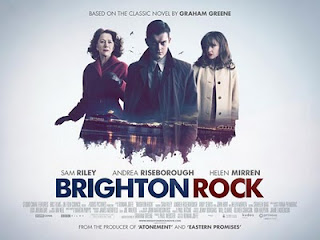 When writer-director Rowan Joffe introduced the preview screening of BRIGHTON ROCK at the BFI last night, he was apologetic. He apologised for daring to take on the Boulting Brothers' classic adaptation, but argued that his movie was borne out deep respect and love of Graham Greene's novel. In the production notes he went further, arguing that Greene's novel was so great, that it DESERVED more that one interpretation. I thought this was a rather odd introduction. Good art should never apologise for itself. And how can one separate the novel from the film in the case where the novelist actually wrote the screenplay?
At any rate, taking Joffe at his word, this is what is likely to happen in any broadly faithful version of Brighton Rock. A violent teenage racketeer called Pinkie murders Fred Hale, a member of the most powerful gang in town. He has to seduce an innocent young girl called Rose in order to find out if she really does know who did it, and prevent her squealing to the police. And while he's trying to placate this needy innocent girl, despite his inward disgust at her masochistic nature, he's trying to out-wit the local gang-boss, Collioni, and avoid the interfering meddling of Fred Hale's friend, Ida. The tone of the film should be menacing, unnerving, sometimes terrifying, but always taut. And running in the background is a debate about the nature of good and evil. Is Ida's simplistic categorisation of herself as good and Pinkie as evil, through and through, like the lettering in the stick of rock, true?  Or is Grace far more complicated and far more grand than her vulgar mind can fathom?
So how does Rowan Joffe's adaptation stack up? To start with the positive, it is a handsomely made film with beautifully observed production design. It takes us from the peeling walls of Kite's house via the faded grandeur of Ida's tea-rooms to the glossy, pretentious interiors of Collioni's Cosmpolitan hotel. DP John Mathieson's (ROBIN HOOD, GLADIATOR) photography captures that watery sunshine of the British sea-side and there is a beautifully lit climax on the cliffs. As for the acting, Andrea Riseborough (NEVER LET ME GO) is an effective Rose, making her delusional belief in Pinkie believable and heart-breaking. She is ably supported in the minor roles by a fine cast, with British actors of the quality of Phil Redmond (ANOTHER YEAR), Sean Harris (24 HOUR PARTY PEOPLE) and Steve Evets (LOOKING FOR ERIC) playing Spicer, Hale and Rose's father respectively. Moreover, there is an air of earnest respect and delicate care that overlays the entire project. Joffe claims he loves the novel and is respectful of the original film. Well, you can feel that.
And maybe that's the problem. Because this film just never takes off. It feels turgid. There is no pace, no sense of menace, and for all the nightmare visions of Pinkie at the end of a rope and scenes of Rose praying, no real sense of the stakes - whether literal or metaphysical. The film feels too safe, too sunlit, too designed somehow. It's as though the effort of getting the 1964 costume designs just right - the perfectly appointed suite in the Cosmpolitan Hotel - has resulted in a series of beautifully framed still shots. But where is the seedy menace of Greeneland? I simply wasn't scared of Sam Riley's Pinkie.
If we're looking for culprits, I guess the decision to set the film in 1964 rather than the late 30s would be one. The "pop" clothes and music, the mods and rockers, are a distraction, and far less menacing than the lurid clair-voyants and fair-gound freakishness of the original film. Maybe the youth angst theme is just to temporary - too situated - for a film about mortal sin. I also think some of the performances are too broad and perhaps the writing too reductive. Helen Mirren's Ida is shorn of the 1947 Ida's vulgarity. She comes off as a simplistic "tart with a heart" - and the use of these simplistic tropes is something I noticed, and disliked, in Rowan Joffe's script for the awful George Clooney thriller, THE AMERICAN. Andy Serkis' Collioni is a caricature - and maybe there is some sense in which those glamorous Italian mobsters are self-consciously caricatures - but you don't get the feeling that Joffe and Serkis are playing with that level of sophistication here.
Just as some of the performances are very broad, the movie also has an incredibly intrusive over-worked orchestral score by Martin Phipps, never ceasing to bring out the Catholic material with its use of religious texts. In fact, the treatment of the movie's religious content is altogether reductive and crude.  Do we really need Pinkie's wooden bedroom to have the paint-stripped in just the pattern to reveal a cross? Do we really need Pinkie and Rose's first kiss to be shot from over-head, Pinkie holding her uncomfortably by the hands in a kind of martyred crucifix pose? Do we really need to see Rose in Church praying before an altar, shot from above the head of Christ? This ham-fisted handling of the religious content is best seen in his choice of final scene - the true test of any screenwriter claiming that he has adapted the book out of love. Admittedly, it was a test that Greene himself partly failed, but that is no excuse.
BRIGHTON ROCK played Toronto and London 2010 and will be released in the UK and Finland next Friday. It opens in Germany on April 21st.
Posted by Bina007 at 10:46