This review reveals the plot of both the novel and the film.
Full disclosure: I am the cliché. I converted to Roman Catholicism at Oxford and transferred the zeal of the convert into an obsession with the writings of the two most famous Catholic converts - John Henry Newman (now on his way to Sainthood) and Graham Greene (whose works appeared on the now thankfully defunct Index Librorum Prohibitorum). Greene's honest portrayal of the difficulty of reconciling Catholicism with humanism - his rejection of simplistic certitude, even though that was what his Church seemed to demand of him - resonated deeply with me. And so, as many other readers, I started off, predictably, with his novels, especially the "Catholic novels" - Brighton Rock, The Power and the Glory, The End of the Affair, The Heart of the Matter, Monsignor Quixote....It developed into a solid collection of literary criticism of Greene's work, thence into biographies and came full circle, reading Greene's superbly analytical criticism of others, not to mention his substantial body of film reviews. Finally, I came to the films. Of the works he scripted, THE THIRD MAN is simply untouchable and perfect. Taut, harsh, unsentimental. Of the films adapted from his novels, surely the greatest is the one he himself adapted (reworking Terence Rattigan's initial screenplay), The Boulting Brothers' 1947 version of BRIGHTON ROCK.
The novel was based in a world that Greene was fascinated by and closely observed - Brighton's underworld of black marketeers, Italian gangsters and sawdust bars. What was fascinating was the Greene depicted Brighton's public face as being no less vulgar, menacing and and disgusting than its underworld. Greene barely concealed his contempt for day-trippers looking for superficial, transient pleasures. Their faults are magnified in the character of Ida Arnold - a vulgar woman, completely of her time and locale. Ida drinks, flirts, visits clairvoyants, and has that complete and utter moral certainty and righteousness that fills the pages of the Daily Mail. She stands in contrast with Greene's anti-hero, the teenage gangster, Pinkie Brown. Pinkie Brown is a man out of time - by virtue of his Catholicism, which makes him "other" in Anglican England - but also because he is emotionally sterile - disgusted by sentiment and sex. He wanted to be a priest not because he felt a calling, but because he thinks that being a priest will allow him to live as a neuter - as nothing. This is the nihilistic outlook embodied in T.S.Eliot's early poetry.
The novel plays itself out as a battle between Ida's simplistic superficial morality and Pinkie's grander conception. He can be demonic, yes, but he also has grasped more firmly what true grace is, and so has a glimmer of a chance of something greater. Pinkie commits murder, but doesn't drink. He seduces the innocent young waitress, Rose, and marries her, simply to prevent her from giving evidence against him. He hates Rose because he hates her wilful naivety and because he finds her loving him absurd. It is absurd. But it is also frightening for him. Because, as in all sado-masochistic relationships, Pinkie realises that it's Rose who has the power. And so he tries to blot her out in the most complete manner - by making her commit suicide. He is not merely removing the threat to himself (the dead cannot give evidence), but removing her absolute faith. By tempting her into committing a mortal sin, he is killing innocence itself. Of course, the irritating, do-gooding interventions of Ida Arnold save Rose from suicide and damnation, and Pinkie is killed instead. But Pinkie is triumphant in the end. For the more charitable, the parish priest holds out the hope of grace and mercy, even for the murderer and seducer. For the less charitable, Pinkie's triumph is that he will ultimately destroy Rose's innocence from beyond the grave, thanks to a malicious recording he left her, telling her that he hates her. The end of the novel is utterly chilling. And for a novel that is widely seen as a "Catholic novel" it seems to dash away Hope and easy religious answers. There are no trite miracles. No easy fixes. 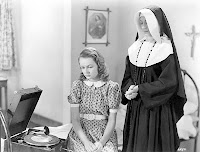 The Boulting Brothers' 1947 film of the novel is a tour-de-force of British noir - far surpassing their later social satires (LUCKY JIM, I'M ALRIGHT JACK) in visual style, if not in substance. From the opening chase scene, and the murder of Fred Hale, the movie is fast-paced and menacing. Brighton is menacing - both the grim under-world and the lurid sea-side attractions. DP Harry Waxman (THE WICKER MAN) and cameraman Gil Taylor (later DP on DR. STRANGELOVE) light everything with stark contrasts and frame scenes from unsettling angles. The point-of-view shots are un-nerving - often taking the audience through someone's hands to the scene beyond, as every scene is one of potential strangulation. That's how we first see Pinkie - a close-up on his hands playing with twine, as if to strangle. Richard Attenborough's performance as Pinkie is superlative - the contrast between his innocent baby-face (he was only 23 and looks 17) and the coolness with which he commits murder and the ease with which he picks up Rose. And, much as Greene reputedly didn't appreciate her performance, Hermione Baddeley is suitably crude and intrusive as Ida - an essential characteristic in confirming our sympathy for Pinkie, despite his heinous crimes.
There are two key changes from the novel. First, it's Catholic debate is essayed more lightly and subtly than in the book. But this is surely the right move. After all, without using an intrusive voice-over for internal monologue, it's hard to see how the Catholic angle could've been explored more explicitly without seeming heavy-handed. The second change is the ending. Where the novel has Rose walking home to listen to Pinkie's vicious record, the film ends with Rose in a convent, listening to a record which, thanks to a scratch that cuts short the monologue, allows her to believe that Pinkie did love her. Her Catholic faith is in tact, she can believe that she did "change him", and all this because of, we are supposed to believe, Divine Mercy. For years, I hated this ending, until I realised that actually one could choose to read it as the bitterest and most ironic ending of all. After all, is it more cruel that Rose has her illusions shattered, or that she lives on completely deluded? Still, this seems like a second-rate shabby sort of fix. Worst of all, one cannot blame Rattigan or the Boulting Brothers for this easier, more commercial ending, because it was Greene himself who changed it, apparently to appease the censors. Greene has been quoted as noting: "Anybody who had any sense would know that next time Rose would probably push the needle over the scratch and get the full message." I don't think that's right. I think you can't have it both ways. Either the end is sugary, or she is deluded. The evasion at the end weakens what is otherwise a sublime picture.
BRIGHTON ROCK was released in 1947.
Posted by Bina007 at 16:20