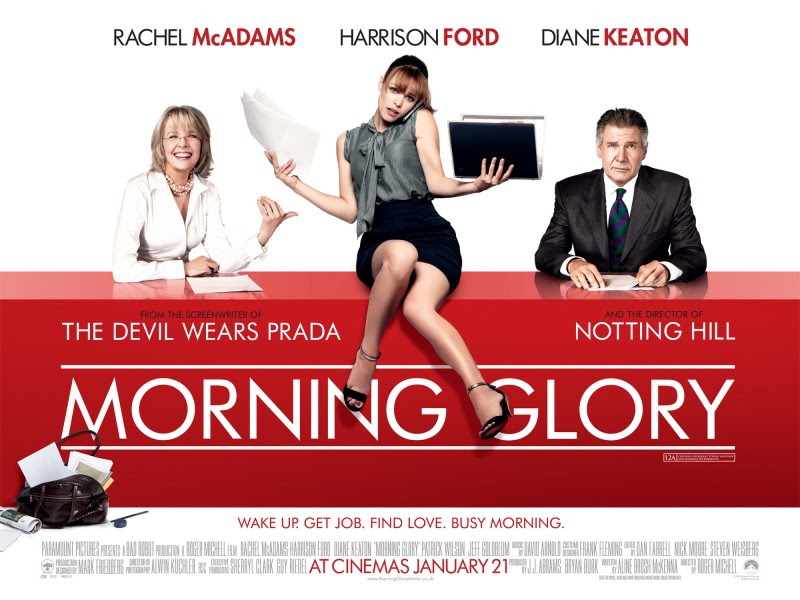 Writer Aline Brosh McKenna (27 DRESSES, THE DEVIL WEARS PRADA) and director Roger Michell (NOTTING HILL) have a served up a muddled mess in their new alleged comedy, MORNING GLORY. A newly emaciated Rachel McAdams (SHERLOCK HOLMES) stars as plucky little TV producer Becky Fuller, hired by Jeff Goldblum's cynical executive, to turn around the worst-rated network TV morning show, hosted by Diane Keaton's Colleen Peck. The emotional heart of the film is the relationship between Fuller and the heavyweight serious journo, played by Harrison Ford, that she shoe-horns into co-hosting the show. He's reluctant to do frivolous cooking segments, and makes everyone's life hell, until he learns the virtue of being a team player. Or something. Frankly it was a last minute character development that seemed about as phony as the high-concept set-up of the movie; as superficially essayed as Becky's relationship with Patrick Wilson's Adam Bennet; and about as painful to witness as Becky Fuller's wannabe charming, ditzy behaviour.
The problem with the movie is that it picks up lots of serious issues and then never bothers to deal with them - either seriously or comedically. There are vague gestures toward exploring the dumbing down of morning TV - the difficulty of achieving work-life balance - but the movie chooses a frenetic pace, montages, and attempts at crackling dialogue rather than the genuinely intelligent, blackly funny sunny satire of a movie like NETWORK. Basically, this is frivolous nonsense and not worthy of anybody's time, least of all the cast.
MORNING GLORY opened last year in the US. It is currently on release in the UK, Australia, New Zealand, Taiwan, Germany, Kazakhstan, Kuwait, Russia, Serbia, Slovenia, Switzerland, Ukraine, Austria, Finland, Norway, Greece, Malaysia, the Netherlands, France, Iceland, Denmark and Spain. It opens in February in Egypt, Brazil, Sweden, New Zealand, Estonia, the Czech Republic, Serbia, Slovenia, Japan, Norway and Poland. It opens in March in Italy, the Philippines, Argentina, Chile, Croatia, North Korea, Peru, Brazil, Colombia, Panama, Romania, Venezuela, Greece, Hong Kong, Hungary, Malaysia, Portugal, Singapore, Thailand and Israel. It opens in April in Turkey, Belgium, France and Iceland.
Posted by Bina007 at 21:56