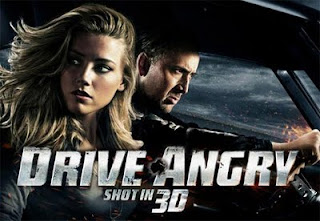 DRIVE ANGRY 3D is a brilliantly crass grind-house movie.  If you want to see a hot chick beat the crap out of a naked chick who's just been caught fucking the first chick's fiancé, then this is the movie for you. Or if you want to see a bad-ass smoking a cigar, fully clothed, fucking a naked woman in a motel room, while simultaneously shooting six assholes dead, then this is your flick!  The plot is ridiculous - obviously. Nic Cage plays a dude called John Milton (Paradise Lost, people!) who escapes Hell to chase down a cult-leader called Jonah (Billy Burke) and save his baby grand-daughter from having her head ripped off. Of course! He is helped by a smokin' hot waitress played by Amber Heard, and is in turn chased down by a mean guy called The Accountant dressed in a Men In Black style suit and played by William Fichtner.

I'm not sure if it makes any sense to seriously review a movie who's every component justifies an exclamation mark, other than to say that director Patrick Lussier and writer Todd Farmer (MY BLOODY VALENTINE 3D) have succeeded in making a movie as ridonkulous and vulgar as CRANK.  It's great as far as it goes and I really loved it for the first hour, but after that, the relentless car chases wore me down. Still, in this age of post-modern detached cynicism, you've got to love any movie that tries so hard to have a balls-out good time.  And, from a technical stand-point, in an era of retro-fitted piss-poor 3D, you've got to embrace DP Brian Pearson's wallowing in the schlock-entertainment factor of the medium.

MY BLOODY VALENTINE is on release in the UK, US, Bosnia, Germany, Hungary, Israel, Kuwait, the Netherlands, Canada, Estonia, Lithuania, Malaysia, the Philippines and Poland. It opens next week in Argentina, Egypt, the Czech Republic, Greece, Kazakhstan, Russia, Bulgaria, India and Armenia. It opens on March 25th in Uruguay, Belgium, France and Turkey. It opens in April in Peru, Brazil, Mexico, Italy, Spain, Panama, Venezuela and Singapore. It opens on May 13th in Iceland, on May 26th in Portugal and on August 6th in Japan.
Posted by Bina007 at 23:14