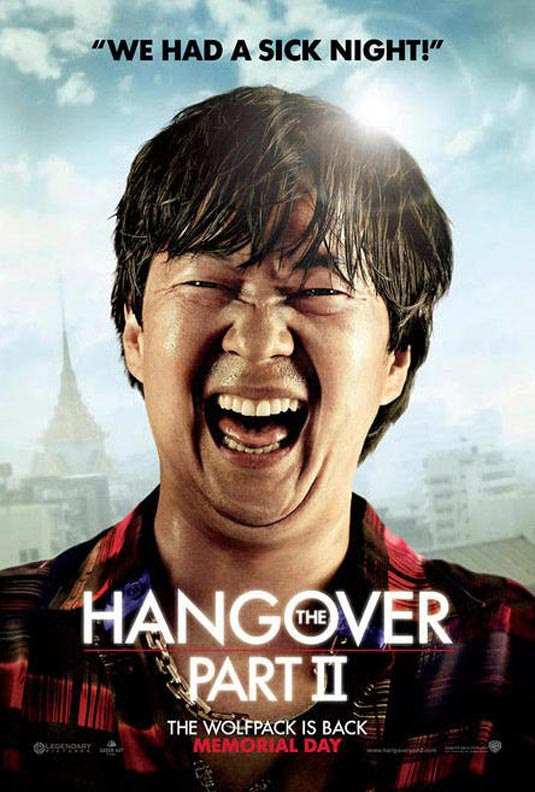 THE HANGOVER PART II has been critically panned. No matter. The collective goodwill that bounced off the first, break-out, film, has enabled the sequel to smash box-office records. Not only is THE HANGOVER PART II the biggest opening on record for an R rated film, but it's also the biggest opening ever for a comedy. So, people are going to watch this flick AND, according to the IMDb ratings, a quarter are scoring it as a perfect ten, with nearly 60% giving it between 8 and 10.

So, what's biting the reviewers?! I guess what disappointed me most about the sequel was its slavish replication of every key scene - every little surprise - from the first movie. This makes the sequel lead-heavy as we fall to checking the boxes from the original, and sucks the air out of every gag. The second problem is that Zach Galifianakis - the break-out star from the original movie - is given way more air-time in the sequel. This brings up a problem I have with a lot of movies - from Galifianakis' previous flick DUE DATE, to most recent movies starring Danny McBride. These guys are funny but in a kind of creepy way, and they work best when used in short cameo scenes to enliven broad comedy. When they move to centre-stage they shatter a movie's equilibrium and start to grate.

The final problem is the movie's setting. Taking the flick from Vegas to Thailand radically changes the sleaze factor of the antics. After all, Vegas has done an amazing job over the past fifteen years, relabelling itself as a family destination and distancing itself from its criminal past. So when our clean-cut heros get into shenanigans, we don't seriously fear for their lives - it's all basically slightly naughty but fundamentally fine. Changing to Bangkok adds a level of grime, grit and stakes that sit at odds with the movie's comedy stylings. For example, in the original, Bradley Cooper's Phil gets tasered. In this flick, he gets shot. In the original, Ken Jeong's Mr Chow gets locked in a car boot. In this flick, he actually dies from a cocaine dose. In the original, Ed Helms' Stu loses a tooth and marries a stripper. In this flick, he gets fucked by a Ladyboy. Not that I'm against explicit material in general. But it just felt that time and again, this movie had moved beyond the same boundaries of the original - and for no real comedic gain. The upshot is that I had a lousy time watching THE HANOVER PART II. I was bored and unamused. The slavishly familiar plot. The lack of a cameo to rival Mike Tyson. The grimier, bleaker environment. It was all, basically, a downer. But what do I know? Director Todd Phillips is sitting on a cash-pile the size of my house.