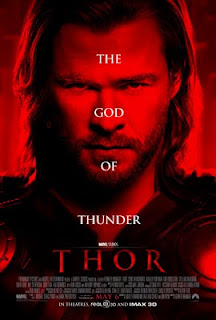 THOR is a super-hero movie so simplistic that it makes you feel like BATMAN BEGINS never happened.  I left the theatre bored and patronized.  Not to mention shocked that the director – Kenneth Branagh – who brought us intelligent and subtle readings of Shakespeare – was trading in such trite pastiche.  The movie neither challenges intellectually nor delights visually. It is – both in terms of style and content – an absolute zero.


The plot has two parts to it, but both are hackneyed and predictable. The first part is your typical Oedipal tale of familial jealousy and revenge.  Papa loves big brother (Thor) more than little brother, so little brother gets his revenge by framing big brother and having him exiled before usurping his father’s throne. This all takes place in a Norse superhero world peopled by buff gods in He-Man outfits but decorated by Trump.  There is an inter-world travel-ator which looks like a posh version of the Star Trek transporter and is, shock! horror! to comic book fans, guarded by a black god.  (The only shock I felt was why Idris Elba – so brilliant in The Wire – was slumming it in this dreck). This brings us to the second part of the story, which is basically your typical, predictable fish-out-of-water rom-com, as last seen in Disney’s THE PRINCESS AND THE FROG.  Aforementioned big brother gets exiled to earth where he meets a hot chick who just happens to be an astrophysicist. He learns how not to be an arrogant arse after one night’s deep and meaningful conversation on top of a camper van, and then buggers off to save his world.


The issue here is that the movie is cheap.  It looks cheap and it goes for cheap laughs. Thor is undoubtedly a camp character but then so is Batman. The problem here is that he is also one-dimensional, whereas Batman has nuance and conflict. Thor’s character “development” from idiot-jock to sensitive-hippie is boring because it doesn’t come by stages but rather at the flick of a switch. The  script-writers are simply uninterested in exploring the genre conventions in which they are operating, and to the post-modern viewer, the result is a movie that seems old clunky, simplistic and frankly, just not trying hard enough.  At worst, it feels like pastiche.  There is little point in discussing performances –for what hope do the actors have to dazzle when they are asked to be little more than cardboard cut-outs? Natalie Portman, as the love interest, Jane, simply has to swoon.  Chris Hemsworth, as Thor, simply has to be ridiculous and be-muscled. Anthony Hopkins, as Papa Odin, has to be austere. And poor Tom Huddlestone, used to much finer fair in British independent cinema, is reduced to twirling his pantomime moustaches as little brother, Loki. This cheapens the actors as much as it cheapens the audience. Poor show, all round.

THOR is on release in all markets bar Japan where it opens on July 1st.
Posted by Bina007 at 21:28