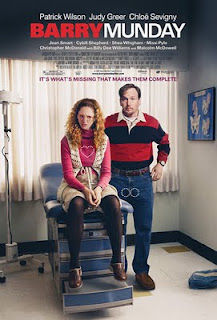 I rather liked THE FAMILY JEWELS, although I must admit it was rather betrayed by its marketing. I was rather expecting it to be a gross-out frat-boy comedy in the manner of a Judd Apatow flick. After all, the central conceit is that Patrick Wilson's character - Barry Munday - is a promiscuous, misogynistic David Brent-style loser who gets his balls cut off by the vengeful father of a teenage girl. Just as he realises he can't father children, he's told that a plain-jane one-night stand (Judy Greer) he can't even remember fucking, is knocked up.  What then follows is actually a rather sweet, rather earnest little romantic drama, in which Barry comes to accept fatherhood and his baby-mama, Ginger, comes to accept his attentions. The movie may be rather predictable and the direction is certainly workman-like, but it's also peppered with some delicious cameos from the likes of Billy-Dee Williams as Barry's boss; Malcolm McDowell as Ginger's dad; and Cybill Shepherd as her mum. Overall, the movie is not particularly memorable but it was enjoyable enough at the time, and Patrick Wilson is so funny and convincing as Barry Munday I would love to see him do more out-and-out comedy.

THE FAMILY JEWELS played a bunch of minor festivals in 2010 and had a very limited US release in October 2010. It is available to rent and own.
Posted by Bina007 at 21:50