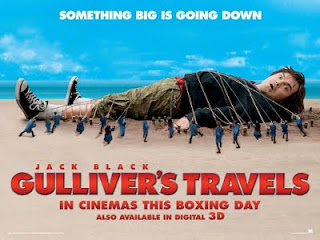 When I was a pre-teen and we all obsessively watched the lo-rent sci-fi TV comedy, RED DWARF, the phrase "almost Swiftian in its rapier-like subtlety" became a standard term of praise, long before we'd read Swift in class and fully appreciated the radical, deliriously scabrous nature of his political satire. That was back in the day when schools taught children useful shit like calculus and Latin.  Nowadays, family audiences have no use for political satire - although one might have thought that in the post global financial crisis world - with governments insolvent and political systems ossified by special interests - now would be EXACTLY the time for it.  And so, dear reader, we get the movies we deserve. Towit, Rob Letterman's utterly banal children's movie, GULLIVER'S TRAVELS - a film based on Swift only insofar as it incorporates a man who wakes up in a land filled with tiny little people called Liliputians.

So, Swift aside, how does it fare as simple family entertainment? Shockingly poor.  A mindlessly simple plot, piss-poor CGI effects, hammy acting from the largely British cast of character actors, and Jack Black playing the character he always plays - the childish, rock-obsessed but ultimately love-able frump. Director Rob Letterman and writer Joe Stillman display none of the wit or imagination seen in MONSTERS VS. ALIENS or SHREK. Must try harder.