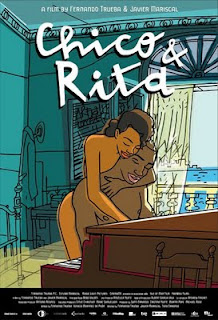 CHICO & RITA is an absolutely wonderful movie - beautifully animated; honest in its depiction of sex; centred on a timeless story of love; and wrapped around Bebo Valdez' jazz score that takes in some of the greats of the post-war jazz scene - Thelonius Monk, Woody Herman, Dizzy Gillespie and Charlie Parker. It's a crying shame that the flick hasn't had the crossover success of a film like BUENA VISTA SOCIAL CLUB (a movie it elegantly references in its final act, thanks to a cameo by real-life chanteuse Estrella Morente) - but hopefully the constraints of a limited release (narrow-minded distributors unsure about an R-rated animated flick?) will be broken by DVD popularity.

Chico is a gifted piano player, looking back from a run-down 1980s Havana to his "glory years" in the 50s and 60s. He meets the beautiful singer Rita and falls in love - or erotic/musical fixation - at first sight. The two lovers are destined to be together and not together - kept apart by pride; fiery tempers; betrayal; and an entertainment business happy to give a contract to a pretty singer but not her piano player. Their journey starts in Havana, but soon Rita achieves success in New York before making a Hollywood movie and ending up in Vegas. Chico crosses paths were her, often acting as her voice of conscience - reminding her of what she is giving up - how inauthentic she is having to be - to achieve success in America.

The three directors - Tono Errando, Javier Mariscal and Fernando Trueba - deserve big props for daring to produce an adult-themed animated movie; for the ambition of their scope - across continents, musical styles and forty years; not to mention delicate references to post-war racial politics. One might argue that the genius of Ignacio Martínez de Pisón and Fernando Trueba's script is that the movie Shows rather than Tells us about the changing political climate - and wears its profundity very lightly.  That said, when the political themes culminate in a moving, half-drunken, outburst by Rita - the movie really does pick up notch - and I defy anyone not to glow with good-will during the final scenes.

CHICO & RITA played Telluride and Toronto 2010 and was released in the UK in 2010. It was released earlier this year in Spain and Greece. It will be released in Poland on July 1st and in France on July 6th. It is available to rent and own in the UK.
Posted by Bina007 at 09:05