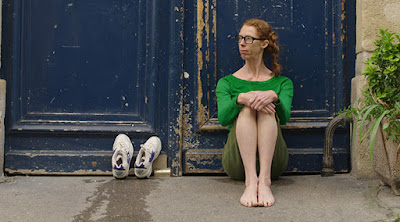 The writing/directing partners Dominique Abel and Fiona Gordon (THE FAIRY) return to our screens with another zany comedy with a social conscience - LOST IN PARIS. It stars Fiona as a Canadian librarian of geeky appearance and MR BEAN-like hapless physicality who goes to Paris to rescue her aunt, the majestic Emmanuelle Riva (AMOUR) who is being forced into an old-age home. The problem is that when she gets there, her aunt has gone missing.  At this point the fictional Fiona meets the equally nerdy, quirky Dom, a homeless Parisian who somehow finds enough money to dance the tango with her in an expensive riverboat restaurent and falls in love - only to find that he has a rival for Fiona's affections - a Canadian mountie!

What I love about this film is that is does something relatively unique in modern cinema, but arguably the oldest of the cinematic arts - proper technically brilliant slapstick comedy in the best tradition of Keaton, Chaplin and Tati.  And just like those great films, it makes us laugh out loud at its silliness while also pulling at our emotions and genuinely moving us. Gordon and Abel are truly talented, and make movies of such unabashed joy they deserve to be better known. And if you thought that hackneyed park bench foot tapping dance scene in LA LA LAND was cute, check out Emmanuelle Riva and her fellow nursing home paramour in the most adorable dance scene I've scene in a long time. And that speaks to this film's social conscience - asking us about how we consign old people to a parking lot waiting for death, rather than acknowledge their same yearning for love, dance, magic!  This is a film not to be missed.

LOST IN PARIS has a running time of 83 minutes and is rated 12A for infrequent strong language and moderate sex references.  The film played Telluride and the BFI London Film Festival 2016. It was released earlier this year in France, Estonia, Belgium, Lithuania, Switzerland, Hungary, Argentina, South Korea, Sweden, the USA, Brazil, Japan, Poland, Germany, Bulgaria, Uruguay and Mexico. It's currently on release in the UK and Ireland in cinemas and on streaming services.
Posted by Bina007 at 20:18