MARGIN CALL - the best film to date on the Great Crash 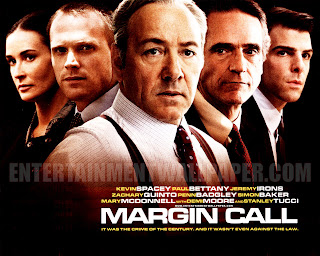 MARGIN CALL may well be the first Hollywood movie that doesn't elevate investment bankers into glamorous devils. It comes as close as any movie I can think of to depicting the reality of working in financial services. The key concept that behind the gravity-defying numbers are a bunch of normal people, with the same frailties and smallness of vision. People want to believe that Wall Street is run by a bunch of cackling, Mr-Burns-like speculators. But in reality, it's just a bunch of insecure kids who are good at maths. Sure, there are tails of mega-bonuses and luxurious off-sites. But what the movies never got until now was the dreary drudgery of the trading floor, the long hours, the self-aware sacrifice of family-time, the awful truth that no matter what you earn, you'll always be made to feel that it isn't enough. That there's always a bigger house, that isn't quite as big as the senior partner's. The absurd fact that you can earn millions at thirty and still feel stretched for cash. You never feel like you have a choice at the time, you probably don't even realise how much you've sacrificed until it's too late. These aren't Machiavellian geniuses but prisoners of the Game as much as the poor schmuck consumers who loaded up on cheap debt and are now trapped in negative equity. We were all conned into living a lifestyle that, in our hearts, we knew we weren't earning - we couldn't afford.

Debut feature director J C Chandor depicts this pathetic and soul-destroying world with an authenticity that is breath-taking. There are some minor slip-ups - no security guard would allow a sacked employee to pass a USB key to a retained employee in plain sight; there is no killer margin call made in the film. But the crumpled messy trading floor, the tired crumpled traders, the coded conversations in which workers fearful for their jobs jockey for position - these things are actually pitch perfect. There are no Gordon Gekko grand-standing speeches in defence of capitalism. No adrenaline-fuelled boardroom shouting matches. Decisions are taken by tired men in boardrooms at three am. Dialogue is measured, non-actionable. But in a few short sentences, laden with unspoken meaning, a career can be an ended - a business shut down.

The movie takes place over a 48 hour period on the commercial mortgage backed securities trading floor of a Lehman Brothers type investment bank. The first day starts with the brutal sacking of half the floor - eerily similar to what you'll see in any FS firm in a down-turn. The relief, the guilt of the survivors - the repressed anger, acceptance of the shafted. After work, a talented young analyst (Zachary Quinto) figures out that the wild gyrations in the market have pushed the bank to the point of bankruptcy. He escalates the matter up the scale, through his direct line manager (Paul Bettany) to his boss (Kevin Spacey) to his boss (Simon Baker) until we get to a 3am board meeting where the super-boss (Jeremy Irons) decides to offload the toxic assets before the rest of Wall Street figures out that the party has ended. This of course means shafting everyone the bank has every traded with, doing it quickly, and for the people actually executing the trades, an end to their jobs.

The second half of the film shows each character dealing with the ramifications of this decision. The senior trader (Kevin Spacey) has to trade-off loyalty to his firm with decency toward the street. The had of risk management (Demi Moore) has to come to terms with the end of her career. And in a superbly written and executed scene with Stanley Tucci's sacked risk analyst, where she asks if he has kids, you realise that she really has nothing now. Tucci's character has his dignity, his family, but is going to lose his house. Penn Badgley's young trader, the guy who bought the Wall Street mythos, has to come to terms with the fact that he's going to be sacked, and that The Street is dead. Only Paul Bettany's character seems to emerge unscathed. He had no illusions about The Street or his own lifestyle - he's been through market crashes before - and he's unsurprised by the super-boss' ruthless self-preservation.

Paul Bettany's character also has the best, most insightful, most lucid speech about the nature of the credit bubble and the ensuing popular backlash against bankers - the 99 percent who want fair pay and fair reward but still took three holidays a year and had a flat screen TV in each room on credit. "I take my hand off and then the whole world gets really fuckin' fair really fuckin' quickly and nobody actually wants that. They say they do but they don't. They want what we have to give them but they also wanna, you know, play innocent and pretend they have know idea where it came from. Well, thats more hypocrisy than I'm willing to swallow, so fuck em. Fuck normal people."

I love that speech. I believe it. Problem is, it's the best and worst thing about this movie. Because the only serious flaw with this film is the editorialising. I'm sure that many a sacked Lehman Brothers employee, many a current investment banker, has thought the same things, but in the months and years that followed the collapse of Lehman Brothers - not in the moments when it was actually happening. That kind of soul-searching happens when the dust has settled. It feels too prescient to have those speeches while the bank is still alive.

Still, for all that, this is an amazingly well written and perfectly acted film. It explains, empathises, never glamourises Wall Street. It has tension and stakes, without ever using cheap tricks, grandstanding, flashy trading scenes. Jeremy Irons and Demi Moore are easily worth Best Supporting Actor nods. But I guess the lack of pyrotechnics means this film never really had a chance.

MARGIN CALL played Sundance and Berlin 2011 and was released last year in Germany, Russia, Estonia, Spain, the USA, Romania, the Netherlands, Canada, Hong Kong, Lithuania, Turkey, Brazil, Greece, Poland and Singapore. It is currently on release in the UK and Ireland. It opens on January 19th in Israel; on January 25th in Belgium and Portugal; on March 16th in Sweden and on April 4th in France. It is available to rent and own in the US.
Posted by Bina007 at 22:24