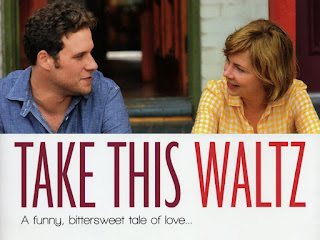 This movie made me angry from the opening credits' sepia-tinted focus on Michelle Williams' blue-laquered toenails.  Poor Margot, it seems to say, so quirky, so right-thinking, making muffins with her face scrubbed clean.  It's like a Williamsburg dream. Except it's not.  It's a part of hipster-heaven-imagined Toronto where a young boho-wannabe couple who never seem to do much work can afford to live in a ramshackle-beautiful house interior designed just-so.  The couple are desperately irritating, right up until you realise that they are really really creepy.  They seem to have a kind of asexual buddy relationship where flirtation consists of speaking in infantile voices and drinking milk and poking fingers in your husband's mouth.  Plus the wife is clearly depressed and the husband so engrossed in making chicken cacciatore that he doesn't notice. So she starts flirting with the neighbour who is, of course!, a rickshaw driver who hangs out at the beach each morning to think.  I couldn't make this stuff up. Except he's clearly not as groovy and right-on and at peace with nature as all that because he's soon stalking her at the Y and then she's stalking him, and it all ends in the unsexiest sex-talk over martinis and a confession about nothing.  Still, as unappealing as I found the cocktease wife Margot and her stalkerish fancyman Daniel (Luke Kirby), at least there's a kind of raw honesty and commitment in their performances.  You realise that the first time you see Seth Rogen (the chicken-chef) react to his wife's confession.  Director Sarah Polley decides to do something that should showcase real acting talent - smashcut close-ups of his different reactions. Except, we learn, Rogen can't act - or at least not that kind of raw drama - he seems to be acting "at" it - and does that annoying Brad Pitt thing where you keep groping your face because that looks natural, right?  I mean, let's be clear, we have to blame Sarah Polley for this self-indulgent, risible mess, just as we lauded her for the Alzheimers drama AWAY FROM HER.  She wrote these absurdly incredible characters and their unsexy sexy language.  She exposed Rogen's inadequacies.  And in a montage designed to show Margot tiring of her new man, she reduces her film to an Ikea advert with a teenage-naive-embarrassing cut to what racy sex might actually look like.  Of course, this movie isn't as radical or subversive or raw or authentic as it thinks it is.   Chicken-man's sister turns out to be that movie cliché - the wise alcoholic.  Basically, the meaning is that we always take the weather with us.  And that very few movies live up to the Leonard Cohen song they're using.  Go home.  Go home. There's nothing to see here.

TAKE THIS WALTZ played Toronto 2011 and Tribeca 2012. It was released earlier this year in Taiwan, the USA (Video on demand), Australia, Canada, Turkey and Sweden. It was released earlier this month in New Zealand, Japan, Denmark, Ireland, the UK, Greece, the Netherlands and Spain. It will be released in Belgium on September 19th; in France on October 31st; and in Brazil on November 9th.
Posted by Bina007 at 20:48