Of the 139 movies I watched, some of the worst were the heavily hyped, high production value epics that fell flat. (PROMETHEUS, I'm looking at you.) By contrast, some of the best times I had at the cineplex were watching movies that were balls-out crazy, silly, goofy and spoofy.  These were movies without pretensions of greatness.  Movies without the budgets to look slick.  But they never forgot the real reason why most of us go to the cinema on a Friday night - to have a bunch of fun. 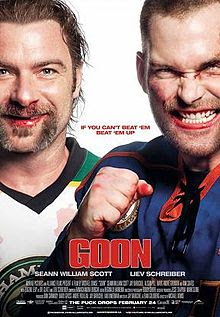 The year began with Michael Dowse's GOON, a film that totally surprised me with its big heart and big laughs.  The movie features Sean William Scott as a stupid, buff ice hockey player whose basic role is to beat people up during the match. He falls for a sassy chick played by Alison Pill before she betrayed the Sisterhood in HBO's piss-poor Newsroom.  GOON is gritty, grungy, chaotic and yet you really care about every single character, not least Liev Schrieber's ageing goon Ross Rhea - maybe the funniest, most moving cameo of the year.  Unjustifiably overlooked - you'd be a fool not to rent goon for DVD date night.

Next up was Baltasar Kormakur's remake of his own caper film, CONTRABAND. Starring Mark Wahlberg as the head of a crew stealing art and shipping them home on a freighter, the movie was fast-paced, very funny and centred on the totally believable camaraderie among the crew.  It's also notable for having another one of those eye-rollingly insane Giovanni Ribisi performances which have become the stuff of hilarity. If there's a sequel, I'm going to be first in line.  The movie also underlines just how talented Mark Wahlberg is, in that he can move between starring in the utterly earnest THE FIGHTER as this kind of anonymous, downtrodden kid brother, to being the mischievous, charismatic leader of a crew. Kudos.

In April, I laughed my ass off watching Phil Lord's loving spoof of 21 JUMP STREET, falling in love with the chemistry between Jonah Hill's  Schmidt and Channing Tatum's Jenko. Indeed, as much as we talk about the McConaughasence, this really was Tatum's year, with this star turn and his producer-writer-actor credit on break-out indie hit, MAGIC MIKE.   21 JUMP STREET "got it" in a way that many TV series reboots don't.  You need to spoof the genre with a generous heart, allowing the audience to fall in love with the central characters and conceit even as they laugh at it.  Also, I'm thinking that Johnny Depp had been waiting YEARS to exorcise his hatred of the teen TV soap with his hilarious piss-taking cameo at the end.

In June, I had a bunch of fun watching Timo Vuorneslea's IRON SKY, a low-fi Finnish sci-fi spoof about Nazi Zombies.  Let me say it again. NAZI ZOMBIES. Do you need another reason to watch this film? Yes it's script is all over the place, and there as many hits as misses, but when it works it's really hilarious and you have to admire the amazing special effects on such a low budget.  Oh yeah, and NAZI ZOMBIES.

Perhaps the movie I was most embarrassed to like was the Farrelly Brothers movie of THE THREE STOOGES starring Sean Hayes, Will Sassso and Chris Diamantopoulos.  This isn't a show that entered the British cultural psyche in the way that it did in the USA and I normally don't respond to slapstick humour and dayglow production design. But after a slow start, I really got into the movie, caring about the characters and responding to the light-hearted cultural teasing. Towit, one of the funniest moments of the year was watching the Stooges beat the crap out of the cast of Jersey Shore.  So don't listen to the haters, and watch it!

The penultimate film in this category is a movie that could have been designed for me: a comedy about a bunch of Aussie park cricketers who tour India.  Boyd Hicklin's SAVE YOUR LEGS! has heart, makes you laugh, and reminds you why you love the prince of sports.  Damon Gavreau gives one of the best comedic performances of the year as Stavros but it's the genuine camaraderie between the cast that makes you enjoy the movie.  And as much as there as certain jokes that really work for cricket fans, there's enough relatable material about growing up and getting new priorities to give this movie a wider audience. It's out in Australia on February 28th and I reallty hope it gets a UK release date, ideally during the summer Ashes series.

Finally, let's hear it for everybody's rogue cop with a heart, Chulbul Pandey. Arbaaz Khan's follow up to the smash-hit, DABANGG 2 repeats the formula of the original almost slavishly but to great effect. Salman Khan is hilarious as the smalltown cop tough on crime and the causes of crime.  Every time he dances by tugging on his belt or puts his sunglasses on the back of his collar, you just have to smile.  And Katrina Kapoor gives us the best item number of the year with Fevicol Se.

All of these films were released in 2012 and are available to rent and own with the exception of SAVE YOUR LEGS! which will be released in 2013 and DABANNG 2 which is currently on theatrical release and has not yet been released on DVD.