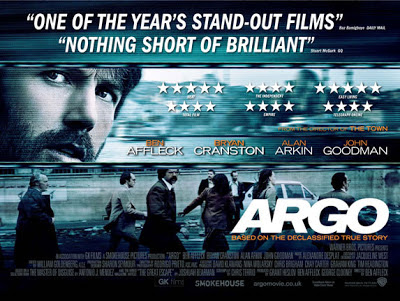 Critics drawing up lists of the best films of any particular year tend to focus on the arthouse wonders and avant-garde. You know what I mean - the latest subtle deeply affecting Iranian agit-drama in which the death of a tree symbolises the ruling neo-fascist kleptocracy. And there'll be more of that to follow. But in this post I want to give mad props to all those film-makers who took the hackneyed genre tropes that make up the vast majority of theatrical releases and reinvigorated them.

First up, CHILDREN'S movies, and PIRATES! IN AN ADVENTURE WITH SCIENTISTS!  This is an absolutely hilarious, beautifully created, intelligent kids claymation picture that casts Hugh Grant as a hapless but well-meaning pirate going up against the nefarious Charles Darwin.  This movie has heart, but not in that schmaltzy manipulative Pixar way (controversial!)  It has wit, style, irreverence, a very British sense of humour, and a kickass Queen Victoria.  Why don't we see more of Hugh Grant in roles like this?

I don't really watch HORROR movies, as I'm totally gutless, so in this category, I'll have to nominate FRANKENWEENIE, Tim Burton's return to form with this poignant horror homage featuring a little boy who re-animates his beloved dog, Sparkie. This is a kids movie that's really for cineastes, with wonderful in-jokes and references, and a genuine love of cinema-history.  Again, no false schmaltz here, but a genuinely tearful experience.  Just goes to show you can make a great film that clocks in at under 90 minutes. Not sure you really needed the 3D though.

Next, DRAMA. For me the best was J C Chandor's MARGIN CALL. I have an on-going beef with how Hollywood represents my day job, and this is the first (and probably last) time that I've seen the reality of life in an investment bank depicted accurately on screen. If you want to know what really happened in the Global Financial Crisis, watch this film, and realise that we were all drinking the cool-aid.  Also memorable for a genius slippery cameo from Jeremy Irons as a thinly veiled version of Lehman Brothers' chief, Dick Fuld. This is the movie WALL STREET 2 should have been.

The London Film Festival brought us the best THRILLER of the year.  ARGO came with the fanfare of the Hollywood machine, cueing itself up for Best Picture. It's basically just a very well put together political thriller, but there's  no harm in being just that. Even though I knew the outcome of the US diplomats trying to escape from Iran, I was on the edge of my seat for the whole film.  And, let's face it, we and the Academy love a movie in which Hollywood saves the day!  With ARGO and THE TOWN, Ben Affleck becomes the best actor turned director since Clint Eastwood, and given the latter's recent poor form, perhaps the best currently working. It's just a shame the phrase "Argo fuck yourself" never caught on.

When it came to DISASTER movies, Joe Carnahan's THE GREY blew me out of the water. Taut, spare, tense, emotional.  Who knew Liam Neeson would emerge as an action hero with actual klout, flying in the face of the buff, waxed, pumped up muscle-hounds that fill the pages of Men's Health. Don't go gentle, motherfuckers.

When it comes to BUDDY COP movies, especially those set in LA, you can assume that you're going to get 2 hours of profanity, macho bullshit and corruption.  The genius of David Ayer's END OF WATCH is that it turned that assumption on its head, with a portrait of true, real friendship and integrity.  Sad to say that we live in such a cynical world, seeing two good guys just going about their business is enough to be considered genre-redefining.

My penultimate choice is a movie from a genre that I think is typically ill served by mainstream Hollywood: the ROMCOM.  I'm not sure why  modern rom-coms are so banal and assinine, when the golden era of precode Hollywood produced such wonderfully acerbic, pugnacious and magnetic relationships. What kind of a world takes us from HIS GIRL FRIDAY to the latest Katherine Heigl vehicle?  Anyways, it was refreshing to see David O Russell give us an off-beat odd-couple in SILVER LININGS PLAYBOOK.  Perhaps the cutest moment in this year's cinema is when Bradley Cooper and Jennifer Lawrence unconsciously hold hands as they walk into the pivotal dance comp at the end of the flick and each denies they did it first.

Finally, hands down the best genre film of the year belongs to the franchise that has become a genre in its own right, the BOND movies.  SKYFALL was, to my mind, the best Bond of the modern era.  Psychologically realistic, beautifully shot and superlatively cast.  And yet it had enough irreverence and good humour to understand that just as we don't want stupid gadgets ("What were you expecting, an exploding pen?") we still do want to see a glimpse of the Astin Martin.  Truly, this was a post-modern Bond and worth every second of its three-hour running time. And remember, my dear readers, if you need any advice on mixing martinis, don't listen to that nucklehead Ian Fleming, but head over to our sister site, CYBERMARTINI.