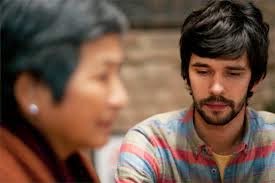 LILTING is a movie that drips with sincerity and authenticity and makes you cry - but not in that emotionally manipulative way that a film like THE BLIND SIDE brings you to a crescendo of weepiness - but in the quiet way that a movie about real loss can. And despite all this - and its profound investigation of grief and the guilt around caring for our ageing parents and the difficulty of coming out - and the way in which we circumscribe our communication to shelter others or shelter ourselves - it's actually a properly laugh-out-loud funny film! That all this comes from a first-time feature writer-director is just astonishing!

The movie is about unpicking the memories and emotions around a dead young man called Kai (Andrew Leung) who lived in  London with his long-time partner Richard (Ben Whishaw) but hadn't come out to his possessive mother Jun (Pei-Pei Cheng).  We begin the movie after his death but in a series of elegantly languidly interlaced flashbacks we get to know and sympathize with Kai over his genuine love for his mother but the way in which he feels trapped by his dependence on her. Meanwhile, in the present, as his boyfriend struggles to grieve for Kai, we see him start to visit her in a nursing home, despite her evident dislike for the rival for her son's attentions, and the ambiguity surrounding how much she really knows about the nature of their relationship.  Much of the humour of the film comes from the incipient relationship between Jun and another resident at the home, Alan (Peter Bowles). Initially, Richard introduces them to a translator (Naomie Christie) to aid their romance, but soon as Naomie becomes more involved in their lives, it's Richard and Jun that she mediates and translates for.

I want to emphasize just what a beautifully elegant and softly woven film this is.  How authentic and conflicted the relationships feel, and just how good the performances are, so that even in the midst of selfish arguments you can sympathize with each participants.  I left the cinema having laughed out loud but also having quietly cried - feeling that I really knew these people and desperately cared about what was going to happened to them.  I can't tell you how infrequent an experience that is at the cinema and how much these unique voices must be supported.  Moreover, why isn't Ben Whishaw more famous?

I suppose the final question is, with the movie featuring a gay couple, and centering on the issue of coming out, whether this is exclusively a gay interest film.  I would argue that it deserves a far wider audience that that.  The issue of how we as vital children relate to our ageing parents is universally relatable as is the idea of what we choose to say and with-hold in our relationships.  This is a wise film indeed.

LILTING played Sundance, where Urszula Ponticus won the cinematography award for World cinema - Dramatic,  and BFI Flare 2014.  It will be released in the UK and Ireland on June 20th.