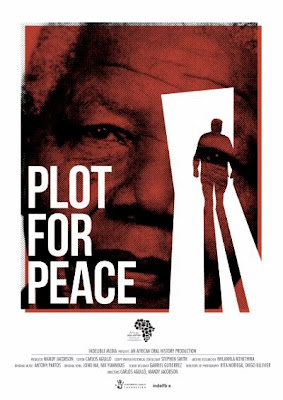 If MANDELA: THE LONG WALK TO FREEDOM peeled back some of the myth surrounding Nelson Mandela's prison release, adding an edge of cynicism to the narrative fashioned by our better selves, then PLOT FOR PEACE is a comprehensive debunking.  Before both films I had the naive impression that international boycotts and the ANCs terrorism forced the deeply religious FW DeKlerk to free Mandela unconditionally and that the famous scene we saw on television was truly Madiba's first step outside of a prison in decades.  LONG WALK TO FREEDOM told us that in reality Mandela had been negotiating with the Apartheid government and living in a comfortable mansion, if still imprisoned, for some time before his release, but essentially sticks to the narrative of two rather idealistic men decided to make change positive rather than let South Africa crumble into violence.  Ultimately, it left Mandela's destiny in his own hands, and that of DeKlerk. All this is a charming bedtime story - the triumph of good over evil - the age of the hero, and both men rightfully received the Nobel Peace Prize for their efforts.

What we learn from PLOT FOR PEACE is that sometimes great change happens not because a benevolent heroic leader takes destiny into his own hands, but because self-interested men, utterly unaccountable to anyone, hidden in the shadows of history, are found in the right place at the right time.  These men aren't the stuff of glossy Hollywood biopics that tug at the heartstrings and make big grand speeches. They are men of compromised actions and motives who nonetheless govern great events.  Jean-Yves Olliver, aka Monsieur Jacques, the subject of this new documentary, is just such a man.

At first glance, Jean-Yves is exactly the kind of man that earnest liberal people would hate.  He's a greedy capitalist bastard who made a fortune trading commodities and defying sanctions against places like South Africa.  He's almost a cartoon villain - a short French-Algerian Gordon Gekko - chomping on cigarettes and laying out his playing cards and changing world history without a care for democratic accountability.  But something in his background made him the perfect actor for south African peace.  A childhood in Algeria during the civil war powerfully taught him that a white minority cannot control a native majority forever, and that if unprepared, the end of the regime can be deeply traumatic and violent. With that in mind, he wanted to broker an end to apartheid that was more peaceful than the Algerian civil war, but to do so, he had to essentially broker peace in the entire region.

Why? Because, as this documentary so concisely and clearly explains, this was the height of the Cold War - with the neighbouring state Angola torn apart by civil war - the government backed by Castro, and the rebels backed by South Africa and the USA.  While South Africa was embroiled in a foreign war she would not focus on domestic peace.  And so began a period of intense shuttle diplomacy in the 1980s, often at Jean-Yves' own expense. He would charter planes and pay court to the regional leaders, dealing with officials from Cuba and the USA, trying to win their trust, establish his own credibility, and come to some kind of mutually beneficial agreement.  The result was a massive prisoner exchange in 1987; the withdrawal of both US, South African and Cuban troops from Angola in the Brazzaville Protocol of 1988; the independence of Namibia; and finally the intense negotiations with Pik Botha and the African regional leaders to bring apartheid to a close. These talks fatally undermined PW Botha - the prime minister - ushering in FW DeKlerk who then could negotiate with Mandela. Thus Monsieur Jacques set the dominoes in motion that ended apartheid.

PLOT FOR PEACE tells this story with energy, excitement and occasional flashes of great humour.  It's a tale full of rogues and villains - colourful characters with great power and greater egos - negotiations that can be undercut by capriciousness - but that can succeed when great men realise their place in history is at stake.  I was shocked at how pivotal Jean-Yves Ollivier was to ending apartheid and indeed civil war in the region and surprised at his total honesty as to his own motives - indeed the candour off all the interviewees. And boy, what access! We hear from everyone from Pik Botha to Winnie Mandela to the Cuban and US policymakers.  Kudos to the film-makers for putting it all together.

PLOT FOR PEACE opened in Spain and France last year and opens in the UK on March 24t on demand on DVD.  It has a running time of 83 minutes and is rated 12A in the UK.
Posted by Bina007 at 19:41