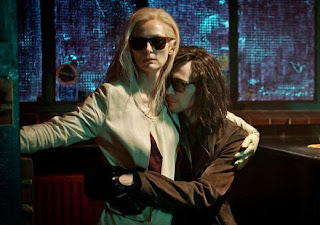 So here's a super-late review of the gloriously weirdly wonderful romantic-comedy ONLY LOVERS LEFT LIVE from art house director Jim Jarmusch (THE LIMITS OF CONTROL).  I originally saw this flick at the London Film Festival, and then watched it again on Valentine's Day at the BFI.  I resisted reviewing it because sometimes the movies you truly love are the hardest to write about. Somehow it's easier to pinpoint exactly why you hate hate hate hate hate a movie and far harder to articulate that nebulous feeling of unashamed joy when you luxuriate in a movie that's uniquely wondrous. But, as this flick is still on a few arthouse screens in the UK, here goes....

ONLY LOVERS LEFT ALIVE tells the story of two ancient vampires called, in biblical simplicity, Adam and Eve.  When we meet them, they're living apart. She's in the richly decorated decadent Tangier, hanging out with her friend Marlowe (wry jokes about ghosting Shakespeare), and generally looking effortlessly punk-rock-chic.  He's hanging out in decaying Detroit, writing awesome moody music on self-consciously old-school tech, procured by his cluelessly half-baked muggle friend Ian.

Adam's in a funk, and Eve comes to rescue him. What's funny and sweet about their relationship is that after all those centuries it has matured into a kind of docile middle-aged marriage and yet we still feel they're passionately in love with each other, and utterly good people who make each other better, which is ultimately the aim, right?  He shows her his decrepit post industrial city by night, dodging fan-girls, and all seems wistfully melancholy until Eve's little sister Ava turns up and throws everything into chaos.  There's a lot of fun to be had at Adam's deadpan response to Ava's hell-raising antics, and the key plot point is that it forces our Lovers onto a plane to Tangier, leaving their ethically sourced blood supply behind them.

Throughout all of this, Jim Jarmusch seems to be engaging us in an elegy for high culture.  Adam is weary with superficial modern culture - the source of his depression - and longs for a greater more glorious past.  Eve might try to snap him out of this, mocking Byron as an old bore, but there's a feeling that the times of great dandy fashion and music and writing is over and they are not just the Only Lovers Left Alive as in the only truly passionate people left, but the only Lovers of Art left in a modern world denuded of taste. To that end, Eve's little sister with her insatiable immediate and unfiltered appetites might remind us of modern pop-culture - superficial, insatiable, undiscriminating.  If Eve's reading Marlowe, then Ava's reading TMZ.

All of which makes this movie sound rather pedagogic but it's only after I watched it, and rewatched it, and pondered it, that I came to this awareness. When you're in the movie, you're enjoying the wonderfully attenuated, chiselled beauty of Tom Hiddleston and Tilda Swinton, and utterly buying into their love story.  You're enjoying the wonderfully curated ramshackle houses that they live in.  You're glorying in the very British humour delivered in particular by Hiddleston and his interplay with Anton Yelchin as Ian. Plus, did I say that the music is just insanely wonderful?

Really, there's nothing not to like here.  And if you've found Jim Jarmusch inaccessible and wilfully obscure in the past (as I have) then please don't let that put you off this beautifully shot, deeply affecting film.

ONLY LOVERS LEFT ALIVE has a running time of 123 minutes and is rated R in the USA and 15 in the UK for strong language.

ONLY LOVERS LEFT ALIVE played Cannes, Toronto and London 2013.  It was released in 2013 in Russia, Croatia, Switzerland, Japan and Germany. It was released earlier this year in Greece, South Korea, the Netherlands, Sweden, Turkey, Belgium, France, the UK, Ireland, Romania, Poland, Taiwan, Denmark and Finland. It will be released in the USA on April 11th, in Australia on April 17th, in New Zealand on May 1st, and in Spain on June 27th.
Posted by Bina007 at 10:45