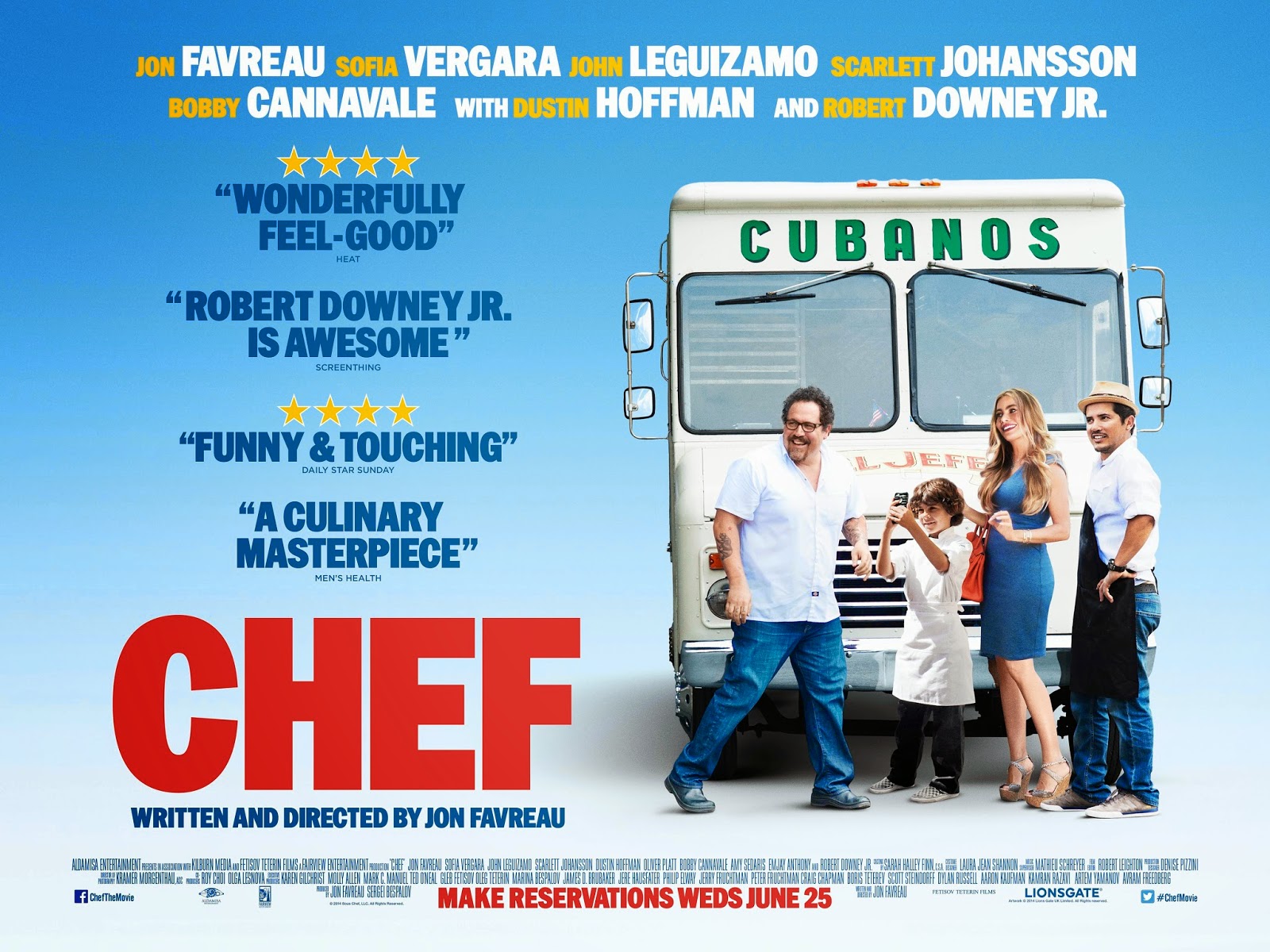 First a public service announcement: do not go to see CHEF on an empty stomach or with a vegetarian friend! Not since Stanley Tucci's glorious BIG NIGHT have I seen a movie more in love with food and the process of cooking - that photographs sumptuous sides of pit beef and steaming piles of spaghetti with more indulgent care. It's a movie that's passionate above being passionate about what you eat - and that wraps us up in that mission to eat authentic, but not over-complicated, food. Which is not to sound precious - this is also a movie that is at its heart a simple family story - about a father reconnecting with his son when his career hits a road bump by quitting his fancy restaurant and driving a food truck serving simple Cuban food from Miami to LA.

I can imagine a lot of critics getting quite sniffy about the basic simplicity of the story. There's nothing particularly new about seeing a workaholic divorced dad (Chef Carl Caspar - Jon Favreau) struggling to reconnect with a cute, emotionally wise kid (Emjay Anthony - IT'S COMPLICATED). There's although nothing particularly new about the mid-life crisis movie in which an apparently successful middle-aged man throws it all in to fight the Man (think Jerry Maguire). And of course, there's something almost annoyingly ungrateful in the obvious analogy between Chef Carl and the writer-director-lead actor of the movie. Jon Favreau started off in the indie hit SWINGERS, but ended up helming the mega franchise IRON MAN movies. It's no great leap to think that he too dreamed of giving it up (albeit temporarily) for smaller scale, more authentic tales/films, and CHEF is the literal and metaphorical result. And while we're on a downer, it did get ever so slightly irritating how every woman in this movie was there as a loving, supportive two-dimensional pretty young thing to swoon over Chef's food and ease him through his existential crisis. I mean, in the modern era, is there any excuse for the shot of Maitre D Molly (Scarlett Johanson) wearing little more than an over-sized jumper ogling Chef's spaghetti? Oh, and do we really need such full on product placement for Twitter?!

So why, given the trite emotional journey and 2-D female characters should one still watch CHEF? Because despite all that nonsense the sheer enjoyment of authentic food drips off of the screen. Favreau is writing about what he loves and it shows. And it's not just the food but the cultures and communities that create it and nurture it - the idea that eating something in its place of birth is special and unique and to be protected. It's also worth giving a shout out to the music in this movie. The soundtrack is just hands-down the most fun you can have in a cinema, and put together with the sun-kissed cinematography from DP Kramer Morgenthau (THOR: DARK WORLD and the movie just wills you to have a good time. The second thing to enjoy in this movie is the sweet and occasionally spiky relationship between father and son. I love that Jon Favreau allows himself to look as mean as he does - shouting his evidently emotionally distraught son out of the food truck and serially undercutting touching moments with his debbie-downer attitude. Other occasional joys: the sheer energy John Leguziamo brings to the screen as Sous-Chef Martin; the classic gonzo cameo from Robert Downey Junior at the centre of the movie; a use of cornstarch that you just can't forget once you've seen it.

So, despite it's well-worn path to emotional enlightenment, and the rather cloying product placement, CHEF is a wonderfully feel-good movie, full of love, authentic spikiness and a real passion for food, family and community.

CHEF is rated R in the USA and X in the UK and has a running time of 115 minutes.

CHEF played SXSW 2014 and was released earlier this year in New Zealand, the USA, Kuwait, Lithuania, Portugal, Vietnam, Singapore and Hong Kong. It goes on release in Estonia in June 20th, in the UK on June 25th, in Ireland on June 27th, in Brazil on July 10th, in Greece on August 21st, and in the Netherlands on September 4th.
Posted by Bina007 at 10:43