THE NEW YORK REVIEW OF BOOKS: A 50 YEAR ARGUMENT 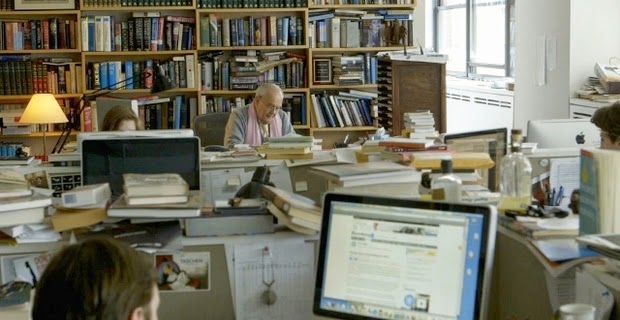 I'm the perfect audience for this documentary and even I was bored. I've been reading The New York Review of Books for 25 of its 50 year history and have often dipped into its wonderful online archive.  To me, it's the magazine I turn to for erudite in-depth book reviews, but also wonderful essays on contemporary political, legal and economic events.  In its pages I have been educated by Ronald Dworkin on US constitutional matters, and Paul Krugman on economics - from Tony Judt on contemporary European issues to Avishai Margalit on the Middle East. The joy of the Review is that you get writers of as high a calibre as the people they are reviewing - creating a kind of double or triple pleasure for the reader - imagine Hilary Mantel reviewing Coetzee, or John Banville on Nabokov on Pushkin. It's a safe haven where style and content and deep thinking still matter.
I had always wondered what this sanctuary must look like in real life. I knew about the Review's origin myth: the scathing indictment of modern reviewing written by co-founder Elizabeth Hardwick and the exploitation of a newspaper strike to put on a serious book review with the backing of poet Robert Lowell, publisher Jason Epstein and the editors Barbara Epstein and Robert Silver. But how did the paper run today? Were they worried about the retirement of now sole editor Robert Silver?  Were its best days - the epic battles between Gore Vidal and Norman Mailer - firmly behind it? Was the paper's influence everything it once was or, in the internet age, was it likely to fade into the sunset like many of its readers?  In short, was the Review still relevant?

Sadly, this documentary, produced by Martin Scorsese and David Tedeschi didn't answer any of those questions. Rather it serves as a fairly plodding, hagiographic document of the Review's own fiftieth anniversary celebrations in New York - combining talking heads of some of the current contributors with stock footage of the now deceased.  We get a sense of the magazine's impact in the 60s and 70s but after that the material is much thinner. Yes, it is still a joy to read, and it was particularly moving seeing the current generation of writers describe their own connection with those early reviewers.  But there was no attempt to look into the future apart from a cursory enquiry as to when Silvers intends to retire.  The overall tone was one of beatific glory - perpetual - omniscient - omnipresent - right-thinking if left-leaning.  All of which added up to quite a dull ride, and arguably even less interesting than Scorsese and Tedeschi's other hagio-doc, SHINE A LIGHT.