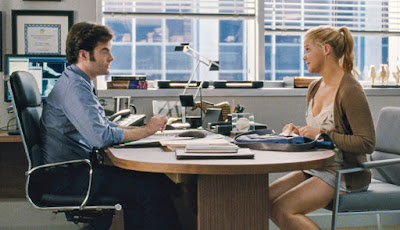 TRAINWRECK is just like every other Judd Apatow comedy. There's a character who's essentially a loveable gorgeous person but because of various issues has an infantile attachment to booze, weed and the sofa, so much so that said character almost loses the love of their life. But after a final act come to Jesus moment, wises up, realises that it's just fine to admit you want a conventional married life with kids and a mortgage and goes ahead and gets those things.  Because make no mistake, despite the frank sexual content, Judd Apatow comedies are very socially conservative, as well as being very formulaic and occasionally very funny.  The only difference in the case of TRAINWRECK is that the immature character is a woman - as written and played by Amy Schumer. She's the one who's getting drunk and having one night stands, and feels weird when her boyfriend says he loves her for the first time. And the guys in the movie - including a brilliantly cast LeBron James - are the ones who aren't afraid to talk about their feelings and are generous in bed and want to get married.  That the movie is formulaic doesn't matter because it's still brilliantly written and acted. It's laugh-out-loud funny, it's not afraid to take its lead character to some dark places, and there's real chemistry between the romantic leads.

Amy Schumer plays a character called, well, Amy, who's a journalist at an edgy but snarky magazine. She's sent by her brilliantly scabrous boss Diana (Tilda Swinton chewing up the furniture) to interview a famous sports surgeon (Bill Hader) because, hey, Amy hates sports! But instead of coming back with an edgy attack piece, Amy actually falls for the caring and lovely Aaron, and he loves her despite her flakiness. And so we then move through the motions of the classic rom-com except with more and better jokes and a great final act dance scene set to Billy Joel! You can't say fairer than that.

TRAINWRECK is rated R and has a running time of 125 minutes.  The movie was released this summer in cinemas and is now available to rent and own.
Posted by Bina007 at 21:00