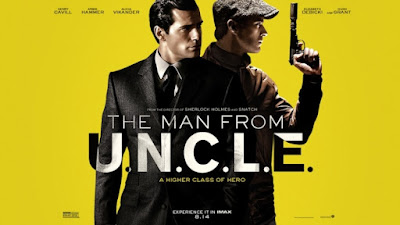 THE MAN FROM U.N.C.L.E. is an extraordinarily handsome spy film that a little bit Bond, a little bit MISSION IMPOSSIBLE and a little bit OCEAN'S ELEVEN. It's stylish, slick and elegant but boy is it joyless too.  This Guy Ritchie directed franchise reboot has none of the wit or imagination of his SHERLOCK HOLMES series.  And where Robert Downey Junior and Jude Law are a truly memorable and charismatic double-act, this movie severely lacks any kid of chemistry between the leads.

The movie is set in the 1960s at the height of the Cold War.  Two secret agents, Solo and Kuryakin - one American and one Soviet - come together to save the world from an evil Nazi millionaire couple intent on acquiring their own bomb.  To do so, they have abducted a German scientist, and so our secret agents team up with his daughter, Gaby, who also happens to be very, very good looking.  And I'm not joking. This movie has a very Zoolander vibe to it. Every scene looks like a spread from Mr Porter.  It's not just that Henry Cavill (SUPERMAN) and Armie Hammer (THE LONE RANGER) are very, very good looking as Solo and Kuryakin, but they have been styled to within an inch of their lives and then draped decorously over the cityscapes of luxurious European cities like an advert for aftershave.  And Alicia Vikander gets the full sixties make-over, complete with bouffant hair, go-go boots and Jackie O sunglasses. It's hard to take proceedings too seriously after all that.

Which I think is rather the point. I think what Guy Ritchie is trying to achieve is a loving pastiche of all those slightly cheesy old spy movies. Think Roger Moore in OCTOPUSSY.  So every now and then Solo tries to give us a witty line in an attempt at deadpan wit.  But it doesn't work because as beautiful as Cavill is, he is no comedian.  He just can't carry a funny line.  As for Armie Hammer, I get the whole hard-ass Soviet robot vibe he's throwing off in the early scenes but the whole point is that he's meant to soften up as the movie progresses into a buddy relationship upon which one could build a franchise. But he's never hard nor soft enough. I kept thinking back to that classic eighties film RED HEART starring Jim Belushi and Arnold Schwarzenegger in the same kind of breaking the Cold War barriers buddy action film.  That's what we needed here, and what just didn't happen.