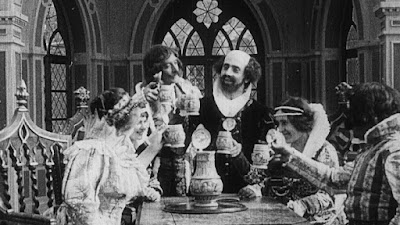 What's quite amazing is how a hundred and ten years ago, film-makers were using trick photography to convey the magic and wonder of Shakespeare - such as Puck magically appearing and disappearing on screen in A Midsummer Night's Dream.  And the way in which productions with a pastoral setting were so effectively re-staged in the countryside. In the second of this five-act film, we focus on the spectacle of Shakespeare in Silent Film - from lavish stage sets of Cleopatra's palace to exotic processions in Julius Caesar.

Part of the charm of the exercise lies in the newly commissioned score that accompanies the film, with work by five composers from the company at Shakespeare's Globe Theatre.  The score is played by a small band using a multitude of period instruments, echoing the particular rhythms and harmonies of the Tudor world mixed with their take on the Venice or Egypt or Rome.

I must admit that I didn't know quite what to expect when I sat down to this film.  Few modern viewers spend much time watching silent film, let alone one with a live score.  I spent the first five minutes concentrating on the band before I learned to mellow into the experience and let the combined score and film wash over me. The experience was funny, insightful and just the right length for such a strange viewing and listening experience. Highly recommended.

PLAY ON! SHAKESPEARE IN SILENT FILM has a running time of 60 minutes.  Release information is available here here. The movie will also be available on the splendid BFI iPlayer.
Posted by Bina007 at 21:20