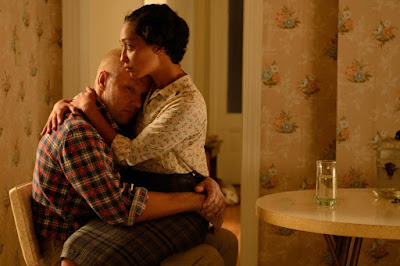 As a result LOVING isn't a self-consciously important earnest court-room drama, with every cliche attendant on that genre. It's an intimate portrait of an ordinary couple who refuse to be made extraordinary by prejudice or its overthrow. And in taking this approach, Jeff Nichols makes a point more powerful than any grandstanding speech - that love is where it falls.  And one can imagine a certain type of audience that wouldn't seek out this film but that would do well to see an unassuming every day kind of love between a white man and a black woman, or between two men or two women....

Ruth Negga is being spoken of for Oscar glory and her performance is superb. But I actually feel that it's Joel Edgerton who deserves the recognition. Because playing an inarticulate, almost simple but steadfast character is far harder than playing one who speaks. At times, Richard Loving seems genuinely awkward at the thought of pursuing his case through the courts. And yet Edgerton's extraordinary physical performance conveys as much love, hurt, confusion, and devotion as any I've seen on screen. And of course, when does finally say something - it's heartbreaking.

LOVING has a running time of  123 minutes and is rated PG-13. The movie played Cannes and Toronto 2016 and was released last year in the USA. It opened last week in Spain. It opens in the UK, Ireland and Norway on February 3rd; in Israel on February 9th; in France and Switzerland on February 15th; in Estonia on February 17th; in Germany and the Netherlands on February 23rd; in Japan on March 3rd; and in Australia and Italy on March 16th.
Posted by Bina007 at 23:53