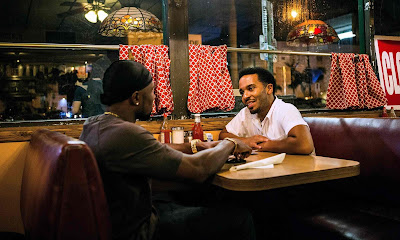 In the second segment, a teenage Chiron has his first gay experience with a fellow schoolkid called Kevin, but in a sequence of tragic inevitability, the bullying finally pushes him to violence and he ends up in jail. We also see his mother (Naomi Harris - perfect accent, subtle and superb depiction of ageing and addiction) at her most terrifyingly unstable. But this is all so much set up for the third act when we meet the adult Chiron.  I won't spoil what happens to him or his mother but suffice to say that for me, the performance of Trevante Rhodes is one of the highlights of this film.  And the concept of yearning and longing for a love that you think you can't have universally relatable beyond the highly specific and authentic setting of this film.

If I have any reservations about this film it relates to the sense of imbalance once Ali leaves the screen; the overuse of the mobile camera and swings from close up to out of focus from DP James Laxton - sometimes it works to heighten the POV of Chiron but mostly it just called attention to itself and took me out of the film; a sense of a lack of pacing in the third part of the film, and a somewhat jarring non-ending. Nonetheless, this is a film that remains important both in its content and impressive for some of its performances.  And of the two Oscar contenders, I only wish the Academy had the courage to back this, the more brave, more accomplished and more vital film.

MOONLIGHT is rated R and has a running time of 111 minutes.  The film played the festival circuit last year, including Telluride, Toronto and London. It opened in the USA last year and earlier this year in Australia, Greece, Israel, the Netherlands, Mexico, Belgium, France, Argentina, Croatia, Portugal, Estonia, Denmark, Peru, Spain, the UK, Norway, Sweden and South Africa. It opens this weekend in Hungary, Italy and Poland. It opens on February 22nd in South Korea, Brazil, Hong Kong and Russia; on March 2nd in Italy and Taiwan; and on March 9th in Chile and Germany.