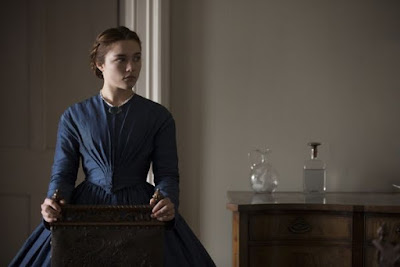 The resulting film is beautifully shot on a micro-budget, making a virtue of its limitations. The action is confined largely to the house and there are only a handful of characters - emphasising the claustrophobia of Katherine's life.  Even the lack of different costumes serves to underscore the dull routine of her life.  In front of the lens, Florence Pugh is stunning as Katherine, showing her strength, intensity but wilful recklessness. I also very much liked Naomi Ackie as Anna, Katherine's maid, who is struck dumb with horror at what she witnesses and yet is utterly expressive.  I felt a bit sorry for Cosmo Jarvis who has very little to do other than be objectified. There's an attempt at a kind of ethical growth at the end of the film but I didn't find it particularly convincing.  This is truly a film that puts its heroine front and centre. And the result is intense, sometimes funny, but rightly disturbing by its ending.

LADY MACBETH has played a number of festivals including Toronto, London and San Sebastian (where it won the FIPRESCI prize).  It opens in France on April 12th, in the UK on April 28th and in the USA on June 2nd. The film has a running time of 89 minutes and has not yet been rated.

SPOILERS:  What I found particularly fascinating in this adaptation is Birch's choice to have Katherine turn on Sebastian and to get away with her crimes.  The final shot of the film sees her dominant, in possession of the house and land that has imprisoned her, but also tragic and alone, without the lover that she committed the crimes to protect.  It's a strong image and to some extent a feminist one, in contrast with the tragic fate of the heroine of the novel, who is punished for her transgressions with an icy death, still fighting for the man who has betrayed her.  The novel's heroine is thus ultimately weak and corrupted by her frustration - a pawn of men to the last.  Whereas Katherine is empowered, although how far one can take this empowerment seriously depends on how far one thinks of her as a psychopath or in control of decisions.  At any rate, I love the more provocative choice taken by the film.  My feelings for Katherine were ambitious - pity, empathy but also horror at her actions.
Posted by Bina007 at 23:04