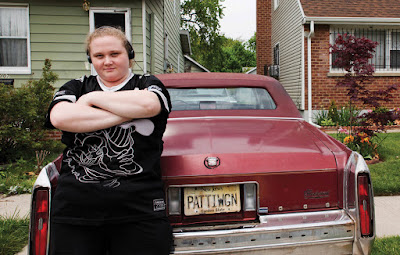 Geremy Jasper's debut feature film PATTI CAKE$ is an exuberant feelgood underdog movie that isn't afraid to show the scuzzier, nastier sides of life in America's rustbelt. Set in contemporary New Jersey, a stone's throw from a Manhattan that feels impossible to reach, it stars Australian actress Danielle Macdonald (EVERY SECRET THING) as the self-style rap star wannabe.  Plain old Patricia Dumbowski in real life, Patti is teased as Dumbo for her girth, but re-creates herself as an empowered, sexy rapper.  All this in the face of living with a selfish weary alcoholic mother (cabaret star Bridget Everett - TRAINWRECK) and a chronically ill foul-mouthed nana (Cathy Moriarty - RAGING BULL).  It's evident that though still a teen, Patti is the glue that holds the family together, keeping food (such as it is) on the table by bar tending at the local dive and waiting tables for caterer.  The love she has for her mother and nana despite the hassle they put her through is evident.  The things that get Patti through the day are her love of rap music, and her best friend and fellow rapper, Hasheem (Siddharth Dhananjay) and the creepy weird black kid (Mamadou Athie - THE CIRCLE) who plays heavy metal who calls himself Antichrist (that they meet at a amateur talent show.  Just as there's real warmth and chemistry in the relationship between the three women, there's real warmth, fun and camaraderie in the relationship between the three friends and soon band-mates.

The plot of the film is predictable and straight out of any underdog film featuring a competition, from EIGHT MILE to SCHOOL OF ROCK. What makes PATTI CAKE$ special is its strong visual style, its raucous humour and its humane but unflinching depiction of the despair.  There's something funny at first in Patti's mum putting on a catsuit and performing in the dive bar, but then something tragic and horrific in how that performance pans out.  But the director is never condescending or leering - but asks us to sympathise with how real life has worn her down and driven her to this.  There's a matter of fact realism in how fragile these lives are.  When nana gets sick, the medical bills pile up. The mum, Barb, says she'll have to open up a new credit card and shuffle some things around.   But I also like the flights of fancy and imagination that this film takes - and its willingness to play with allegory. It's no coincidence that the rap producer that Patti admires is called OZ (Sahr Ngaujah).

Overall, PATTI CAKE$ isn't groundbreaking in its format or plot, but it IS touching, brave, funny and genuinely moving.  It's exactly the kind of film that should break out and affect audiences around the world, and it should make Macdonald and Dhananjay comedy stars to reckon with.