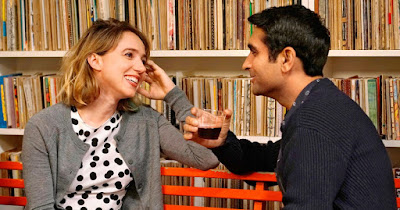 THE BIG SICK is a culture-clash romantic comedy based on the true story of how stand up comedian Kumail Nanjiani (SILICON VALLEY) met his wife Emily Gordon (Zoe Kazan - RUBY SPARKS).  He grew up in Pakistan and though settled in Chicago his mum and dad (Anupam Kher) still expect him to be an observant Muslim and to marry a Pakistani wife, a parade of whom happen to drop by for family dinners so that he can choose one.  Even when Kumail meets psychology student Emily, and even when they both fall in love with her, he can't envisage a future with her if it means giving up his family who would ostracise him.  And so she breaks up with him and that should be that.  However, as in real life, Emily gets sick, goes into a medically induced coma, and Kumail realises how much he loves her. He also starts to bond with her parents - played by Ray Romano and Holly Hunter - nuanced characters who both resent his treatment of their daughter, but realise he loves her, and are battling with their own relationship issues.  The sickness also gives Kumail the courage to tell his parents how he feels, and to tentatively navigate a new relationship with them based on truth, chipping away at their froideur.

The movie is properly laugh out loud funny and on point with its cultural observations - particularly the price paid by second gen immigrants trying to balance family obligations and modern life.  We actually don't get much of how the white girlfriend fits into the Pakistani family as that presumably happens after the scope of the film.  It's heartfelt, a genuinely unique look at a very common relationship issue, and well worth watching.  I particularly loved Ray Romano as the sympathetic but rather shambolic father, and Zoe Kazan simply acts everyone else off the screen.

THE BIG SICK has a running time of 119 minutes and is rated R. The movie played Sundance, SXSW and Sundance London 2017. It opens on June 23rd in the USA, June 30th in Canada, July 6th in the Netherlands, July 12th in Belgium, July 14th in Canada, July 28th in the UK, August 3rd in Australia, September 15th in Norway and November 16th in Germany.
Posted by Bina007 at 22:30