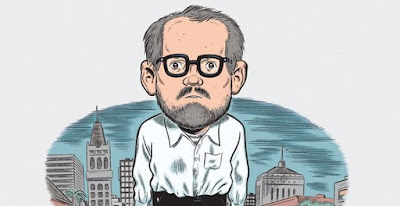 To quote the back of Daniel Clowes' darkly brilliant graphic novel, "Wilson is a big-hearted slob, a lonesome bachelor, a devoted father and husband, an idiot, a sociopath, a delusional blowhard, a delicate flower, 100% Wilsonesque!"  In this new movie from director Craig Johnson (THE SKELETON TWINS), Clowes adapts his own work faithfully to give us a film that is funny, melancholy and sometimes plain crazy.  Woody Harrelson plays the protagonist as a shambolic man with no sense of proper behaviour.  Spurred by the death of his father he tracks down his ex-wife Pippi (Laura Dern - CERTAIN WOMEN), who's now a recovering addict. She tells him she had the child he thought she aborted, and put her up for adoption.   Much of the rest of the film concerns this deeply dislikable and yet somehow charming man trying to forge a relationship with the girl (Isabella Amara - SPIDERMAN THE HOMECOMING) and navigate the wild twists that life throws at him.  To say more would be to spoil the surprise.

There are some genuinely brilliant scenes and lines - from Wilson trying to make conversation with a Nazi - to Wilson's biting critique of suburban architecture - to Laura Dern in a massive physical fight.  But the real genius of the film is to present us with a character who's selfish, mean, reckless and just plain weird and make us sympathise with him. After all, Wilson may be an arsehole, but he's also right about how modern gadget society has isolated us, about the slow death of life in suburbia, of the importance of just taking time to talk to people. His instinct to reach out to his child is right, if expressed in a absurdly wrongheaded way.  In a sense, Wilson is the best and worst of all us - and his refusal to be conventional is itself a courageous act.  I challenge anyone not to find this film's resolution touching.

WILSON has a running time of 94 minutes and is rated R. It played Sundance 2017.  It opened in the USA in March, in Italy in April and in Australia and Spain in May. It opens in the UK on June 9th and in Germany on June 29th.
Posted by Bina007 at 23:30