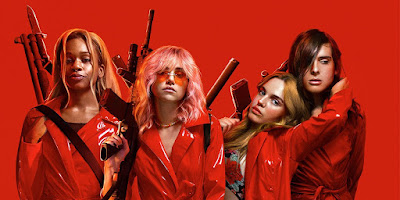 Sam "Son of Barry" Levinson returns to our screens with the stylish but morally bankrupt political satire slash horror film, ASSASSINATION NATION. It's a film written and directed by a guy who believes he is being truly progressive in calling out slut-shaming and female sexual exploitation but who tragically and apparently without self-awareness is similarly exploitative in how he depicts teenage girls.

The film posits a contemporary American town riddled with social media and MAGA sentiment.  An anonymous hacker starts released people's private emails, photos and texts.  Predictably, the townsfolk respond by becoming a feral mob, and with law enforcement too busy to deal with it, violence ensues. Our heroine, Lily (Odessa Young) is a truly dumb girl who sends explicit pictures of herself to an older man (Joel McHale).  This could've actually been an interesting story if the writer had explored the grooming aspect of this but no, it's just passed over quickly.  She gets exposed and is painted as a whore, and targeted by the mob when they think she's also doing the doxing. I mean, how dumb do you have to be - why would you dox yourself? Anyway, this leads to her and her three best friends being hunted, before they in turn become revenge killers.

There are occasional moments of brilliance in this film.  Hari Nef is truly amazing playing Bex - a teenage girl who hooks up with the guy she really likes at a party only to have him reject her after sex.  The sheer depth and nuance of emotion on her face after he pulls away is so moving - and what I love is the ambiguity of whether he's just being a classic teenage boy douchebag or whether there's also a layer of him freaking out because she's trans.  Nef is an actress to look out for.

But other than a handful of very truthful moments, what I mostly got from this film is that Levinson wants to tell us the movies he likes - from THE SHINING to KILL BILL - and would probably be better off directing commercials than features. He has an eye for an arresting visual, but doesn't have the balls to sustain his narrative. After all, in the world he posits, the logical outcome is that the two girls pulled out of the house would be gang-raped and left for dead - the trans girl would be strung up - and the protagonist would be shot.  But what's most offensive is that the director seemingly wants to criticise society for sexually objectifying girls while simultaneously really enjoy showing his heroine scantily clad covered in blood. Grow up.

ASSASSINATION NATION is rated R and has a running time of 108 minutes.  It played the BFI London Film Festival 2018. It also played Sundance and Toronto and was released in the USA and UK earlier this year.
Posted by Bina007 at 17:47