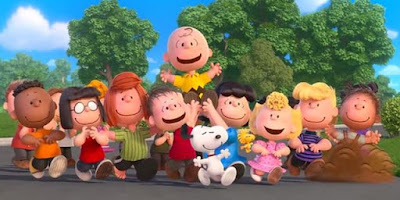 Director Steve Martino (ICE AGE: CONTINENTAL DRIFT) has done an absolutely superb job of translating the joyous Peanuts cartoon strip to the big screen in a new CGI-animated feature. Written by Charles M Shulz' son and grandson, the script really captures everything we loved about the original comic strips, satisfying us with all the trademark themes and gags.

In the main plot Charlie Brown falls instantly in love with the infamous Little Red-Haired Girl but can't pluck up the courage to speak to her. So he sets about trying to impress her by entering the school talent contest, then writing a book report on War and Peace, then learning to dance - only to be foiled at every turn. In the sub-plot, his faithful side-kick Snoopy also indulges in a romantic fantasy as the World War One Flying Ace, trying to rescue his love Fifi from the Red Baron.

In the midst of all this we get all the classics - Snoopy tackling Linus from his security blanket; Lucy dispensing advice from her booth; the kite-eating tree; "a dark and stormy night"; the classic music from Vince Guaraldi. Most importantly, the writers weave in the fantasy elements to reality - so the Red Baron's plane can rip up a real world book report. Added to this we have really beautiful animation - I loved the feeling of fuzzy fur on snoopy, for example. My only criticism is the choice of modern pop songs for the sound-track. The felt out of step with the nostalgic design of the movie - after all, kids don't talk on landlines anymore.  And I suspect that the music will make this film age far worse than the other Peanuts films.