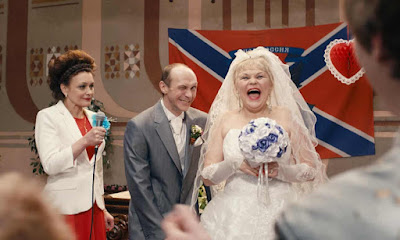 Sergey Loznitsa's DONBASS is a strange surreal examination of the Russian agitprop and invasion of east Ukraine in 2014. This might seem like a niche arthouse topic but given all our concern with potential fake news, bots, twitter accounts and whatnot influencing our elections in the West, the film has a horror show urgency to it.

It opens with people running through town fleeing troops, but it turns out that they're extras being directed in a video shoot to create a fake news blast. This is the kind of maddening fakery that occurs throughout the film to create a feeling of sickening unmooring from the truth. Later on a rich businessman is shaken down by local troops.  He owns his car? Fine. Prove it by handing it over to the local militia to use for their war effort.  All of these short stories add up to a sense of Kafka-esque craziness.  But then, every once in a while, one of these crazy stories in interspersed with one of simple suffering and its jarring and all the more moving.  There's one particularly awful one where we're taken inside a small, dark, damp shelter housing many families. Our guide is a smart sparky kid proudly showing us his "room" - the upper bunk bed in a room full of many such beds, with damp trickling down the wall, and everyone dressed in multiple layers of clothes to keep warm.   The overall impact is brutal, provocative and compelling. This is must-watch cinema.

DONBASS has a running time of 121 minutes. It played Cannes 2018 where Loznitsa won the Un Certain Regard directing prize.  It opened last weekend in the UK in cinemas and on streaming services.
Posted by Bina007 at 08:02