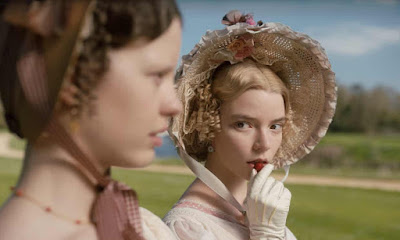 Autumn de Wilde's directorial debut is a handsomely made new version of Jane Austen's iconic romantic comedy, Emma. Except here it's cast as "Emma." with a full stop after it because the director wants us to know it's a period drama.  The film reflects some of this heavy handed and just bizarre gesturing. Why, for instance, do Harriet's schoolmates need to march around the village in red cloaks like something out of The Handmaid's Tale?  There's also lots of plain bad judgment.  Why does Mr Knightley have to be shown arse-bare? I blame Andrew Davies.  Why is Harriet's school bedroom more lavish than a country house?  Why do we need to see Mr Knightley petulantly throwing a fit when his initial attempt to propose to Emma is interrupted - and yes, dear reader, that is not a scene from the novel.

Still, one can forgive this EMMA.(!) its occasional lapses, and indeed its lack of ambition relative to - say - Greta Gerwig's superb meta-textual LITTLE WOMEN. This EMMA. is a movie for our strange times - and thanks to our strange times, available to stream at home. It is very pretty, very soothing, very funny, and very romantic. And indeed, apart from the lapses cited above, comfortingly faithful to the original text.

It tells the tale of a spoiled young rich girl called Emma who takes pity on an illegitimate schoolgirl, much her social inferior, called Harriet. Rather than marry a solid, decent farmer, Emma persuades Harriet to aim socially higher, for the oleaginous reverend Mr Elton. Meanwhile Emma has her head turned by the similarly charming but nasty Mr Churchill, becoming nasty under his influence, until a third act redemption, with the social order being restored.

I very much liked Anya Taylor-Joy (THE WITCH) as Emma. She gets that Emma really is a frightfully selfish snob at the start of the book with a nastiness that Gwyneth Paltrow simply wasn't willing to explore in her screen version of the heroine.  I also rather like Billy Nighy playing himself / Emma's hypochondriac father.  Whoever decided that his heavily brocaded jackets should camouflage themselves into his armchair and screens is a genius - and I like how the added comedy of the screens allows for a declaration of love later.  I even liked Johnny Flynn as a less than austere Mr Knightley and Mia Goth as Harriet Smith.

But the stars of the show are always in the smaller parts - with Miranda Hart heart-breaking as Miss Bates - and Tanya Reynolds of SEX EDUCATION simply brilliant as the odious Mrs Elton.   On the other hand, Amber Anderson was deeply anonymous as Jane Fairfax.

Overall, this really is a very charming, light, uplifting and wonderful piece of escapism.

EMMA. is rated PG and has a running time of 124 minutes. The film is available on streaming services.
Posted by Bina007 at 08:41