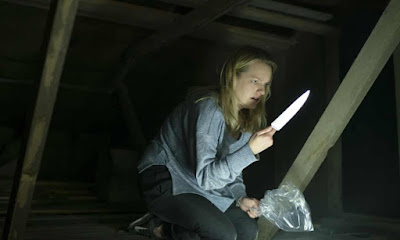 I'm not a huge fan of horror films - blame watching THE EXORCIST and THE SHINING waaaaay too young.  But needs must in these strange times.  THE INVISIBLE MAN is one of a handful of current releases also available to stream during the lockdown, and I thought I would give it a go. The good news is twofold - first, despite being written and directed by Leigh Whannell of SAW fame, it really isn't that horrific so people who have a low tolerance for horror can watch it; second, it's a really well-made and gripping thriller.

The only name star in the film is Elisabeth Moss (THE HANDMAID'S TALE) and she basically carries the entire movie. As the film opens she's executing a plan to escape her abusive but mega-rich super-scientist boyfriend from their eery modernist mansion.  She hides out in her sister's boyfriend's house - said boyfriend is handily a cop.  And when her abuse ex apparently commits suicide, all seems rosy.  The problem is, an apparently invisible man is stalking her, frames her for murder,  and has her incarcerated as a psychopathic killer. Naturally there are more plot twists and jumps, but fair to say that this is a really slipper, clever drama that kept me guessing.  Even better, it's filmed in a really clever way, with lots of great jump cuts, and invisible man POV shots. The atmosphere is intense, tricksy and enthralling.  I would highly, highly recommend this film and insofar as it sets itself up for a #metoo revenge drama sequel, I am here for that.

THE INVISIBLE MAN is rated R and has a running time of 124 minutes. It is available on streaming services.
Posted by Bina007 at 08:16