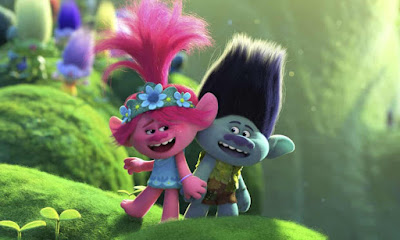 TROLLS WORLD TOUR is yet another film that should've been released in cinemas but is now available for you to stream at home. And I'm pleased to report that it's a delightful movie - and a worthy successor to the 2016 original.

In this sequel, Queen Poppy (Anna Kendrick) and her best friend Branch (Justin Timberlake) are living happily in their world of pop-music loving happy trolls. That is until they realise that the world is full of all different kinds of troll - and shock horror! not all of them like pop music! Some are into rock, or reggaeton, K-Pop, classical music or country.  Back in the day, their troll ancestors decided that the differences between the trolls were to great for them to live (and sing!) in harmony, so they all went to live in their isolated communities.  In the present day, a rock music loving troll called Barb wants to reunite all these trolls, and restore harmony by playing a magical power chord that makes them all love rock music. At first Poppy also buys into the idea that they should all be united, although for her this means loving pop music.  And so begins a short film about learning that people are better off doing what they love, and that true harmony comes from respecting difference rather than enforcing unity.

What I love about these films is how wonderfully imagined they are - the characters are so adorable - the colours so bright - the songs so infectious. The designers clearly had fun creating characters to embody the spirit of the different music styles - with a particular shout out to whoever came up with the look for Kelly Clarkson's country singer, complete with piled up Dolly Parton hair. This isn't a film with the knowing cynicism of SHREK. It's just genuine heart-felt heart-warming earnest fun.  And I think that's truly what we need right now.

TROLLS WORLD TOUR has a running time of 90 minutes and is rated PG. It is available on streaming services.
Posted by Bina007 at 12:54