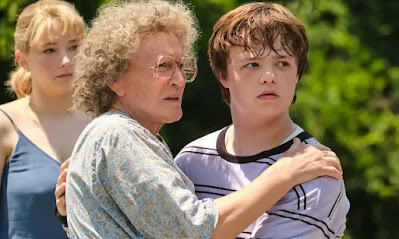 J.D.Vance's Hillbilly Elegy was something of a publishing sensation and I very much enjoyed reading his biography.  It appealed to me as a tale of a young kid born into the opioid crisis that bred Trump's base, complete with a drug-addict mum, rescued by a a battle-axe of a grandma, who somehow gets himself into an Ivy League law school and the Marines. Along the way, Vance speaks sympathetically about the social circumstances he grew up in while also criticising some of the more feckless behaviour it breeds.  This willingness to not simply to blame structural issues but also personal choices made the book controversial.

I was surprised that the book was inspiring a narrative fiction movie rather than a documentary.  Things that might pass as credible in real life seem broad and crass and worst of all patronising when fictionalised. And there's not a little poverty porn about Ron Howard's new film. Glenn Close stars as "mamaw" complete with frizzy afro, drooping latex boobs and stomach and hideous glasses and teeth.  It's all so patronising and broad as to be offensive. And then we have Amy Adams as the addict mum Bev - another broad performance in a thankless one-dimensional role. Speaking of which, I give you poor Freida Pinto as the protagonist's supportive college girlfriend who seems to exist merely to further his career. As for the hero? He just comes across as banal and forgettable. I didn't want him to succeed - I wanted the movie to be over.

HILLBILLY ELEGY is rated R and has a running time of 113 minutes. It was released on Netflix on November 2th.