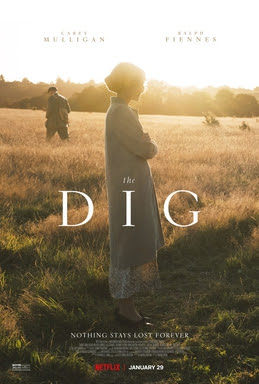 THE DIG is an incredibly earnest and prettily produced historical drama, but one that falls prey to lumpen dialogue, heavy-handed politics and cliched character development.
It's a retelling of the discovery of an Anglo-Saxon burial boat and a cache of rare artefacts in an archaeological dig in Suffolk, in 1939.  The find is familiar to most British schoolchildren, especially if like me you grew up in the area, and many of us took school-trips to see the Sutton Hoo finds. They were revolutionary because of their rarity but also because of how they redefined how we considered the "dark ages".  Through the sophistication of the artefacts, historians could see that Anglo-Saxon culture was actually far more developed than had been presumed.  The film wants to tell us this too - and does so with Basil Exposition levels of clumsiness, usually taking the form of excited declamatory statements from Ken Stott's British Museum archaeologist.
Archaeology being a fairly dull, painstaking exercise, the screenwriter Moira Buffini decides to add some excitement with a couple of action scenes and a hokey romance. The former take the form of a scene where the gifted amateur archaeologist Basil Brown (Ralph Fiennes) nearly suffocates when the dig collapses on him, as well as a scene where a RAF pilot crashes into a nearby river.  The latter takes the form of Lily James' archaeologist Peggy Preston realising her husband (Ben Chaplin) is probably gay and at the very least frigid resulting in her having sex with Johnny Flynn's amateur photographer, Stuart Piggott.
Are these spoilers? No, not really. Everything in this film is so clearly telegraphed you can see the character arcs and plot twists coming as soon as the characters are introduced. Lest you ever forget, war is imminent! So we get RAF planes flying overhead at every moment, and this underscores the DOOM that overhangs Carey Mulligan's sick landowner. The inevitable battle between the amateurs and the institutional control freaks at the British Museum is, well, inevitable. And as soon as Lily James turns up in her scantily clad holiday clothes with her frigid husband you can see the affair coming a mile off.
The politics is heavy handed too. There's a running thread of the Establishment not valuing outsiders - whether it's Mrs Pretty not being allowed to go to university, or Mr Brown not being given credit for the dig, or Peggy Preston being patronised by pretty much everyone except Cousin Stuart. And yet this comes up against an almost Downton Abbey-esque doffing of the flat tweed cap with Mr Brown and his wife grateful for any crumbs of praise from Mrs Pretty.
What's so annoying about all this is that the film, directed by Simon Stone, is actually well made insofar as it has lovely lush British golden hour country landscape cinematography; a lot of care has been taken over period costumes and art direction; and the cast is first-rate (even in Mulligan is way too young to play Mrs Pretty). It's just all so wasted on such a twee pointless script. I would much rather have watched a doc on Sutton Hoo instead.