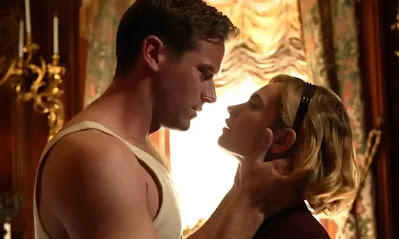 Daphne Du Maurier's nasty little thriller, Rebecca, is both iconic as a short story and as its film adaptation by Hitchcock. It's a grim tale about a banal simpering middle class spinster who falls for an unattainable rich aristocratic widower.  Which is not to say she doesn't attain him. For reasons that are still murky to me, he marries her, maybe to protect himself from the ghosts of his first and titular wife.  But the new, unnamed wife will never really possess her husband because he remains obsessed by the cynical and manipulative Rebecca - a woman beloved by all including her obsessive and diabolical housekeeper Mrs Danvers.  At the end of the novel, there is no happy ending. The couple are trapped overseas in a loveless and frigid marriage. The only triumph is that the second Mrs De Winter realises her husband never loved his first wife. At the end of the Hitchcock version we get a slightly soupier Hollywood ending. Joan Fontaine's second wife has gathered some courage and supported Laurence Olivier through his trial. He clings to her like a parasite. But it's no marriage of equals. Nonetheless, both original novel and film are of a tone - sinister, nasty, dark, cynical, blighted, thwarted and corrupt. It is Rebecca who sets the tone.

In this new adaptation by a director I very much admire, Ben Wheatley, the tone is altogether different. The south of France is lush and sunlit and Mr De Winter and his second wife (Armie Hammer and Lily James) seem young, healthy, vibrant and jarringly contemporary despite the period setting.  He takes her home to a lavish mansion but instead of the gothic gloom of the original we have Kristen Scott Thomas chomping through the scenery in a high camp version of Mrs Danvers that made me laugh at it rather than shudder from it. I had to question whether I was watching a Ryan Murphy film. And so it goes on, bad casting and bad direction. Sam Riley is utterly toothless as Rebecca's nasty cousin. The thriller/drama utterly uninteresting. It winds on to its ending which is about as cynical and Hollywood happy as anything I've ever seen. All is happy and sexy and fruitful. Rebecca has truly been vanquished. Along with any credibility Ben Wheatley ever had.

REBECCA has a running time of 123 minutes and is rated PG-13. The film was released on Netflix on October 21st.