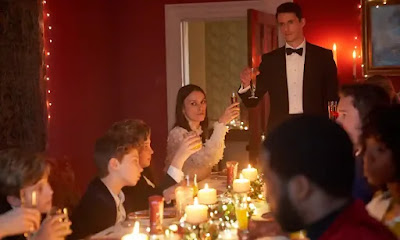 Camille Griffin's brilliantly nasty little black comedy, SILENT NIGHT, deserves to become a cult Christmas classic alongside BAD SANTA and TRADING PLACES. It basically satirises all those posh, mawkish, godawful Richard Curtis films as well as middle-class Englishness in general. It gathers together a bunch of well-heeled university friends in a lovely country house for Christmas dinner, where the angst is about whether or not Waitrose has run out of sparkling water and sticky toffee pudding. Except, there's something bigger going on than your typical One Percent Problem. The world is about to end because of an irreversible environmental disaster, and everyone is going to take a suicide pill after Crimbo dinner.  These pills have been provided by the government. I mean, not to everyone, you understand. Not to immigrants, and the homeless and people who don't count in our affluent society. And as with the current climate and epidemiological crises, there are people who are in denial and think it's all a conspiracy. Not least the increasingly desperate son of the hosts, played by JOJO RABBIT's Roman Griffin Davis (conveniently the son of the director) much to the chagrin of his exasperated parents (Keira Knightley and Matthew Goode in standard posh mode).
The darkest of dark comic conceits is played beautifully by the superb ensemble cast. My favourite moments are those with the best swearing, or those with the most surprising pathos:  a little girl who won't cuddle her mummy, because mummy spent her trust fund on a pair of shoes.  It prompts a fun parlour game: what would YOU do if the world were about to end? What would you spend on? Who would you shag? And would YOU take the pill?

SILENT NIGHT has a running time of 92 minutes and is rated 15. It played Toronto 2021 and is on release in the UK.