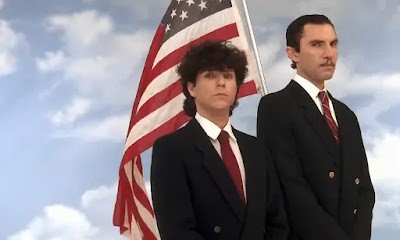 I came to Edgar Wright's new documentary thinking that Sparks was a novelty act. The weird glam rock singer and Hitler-looking grim keyboard player singing This Town Ain't Big Enough For The Both Of Us. I only new that they were still around when Leos Carax' brilliantly bizarre ANNETTE was released, with music by the duo. But by the end of this long and loving documentary I had come to a new found respect and eve love for the band, and can't wait to dive into their 25-album-and-counting back catalogue. I turned to my husband at the end of the movie and said that the fact that such a deeply weird, witty, intelligent and NICE band had survived all these years and had new generations of fans said something good about humanity. And certainly about them. It's nice to see a pair of musician-brothers not turn into the feuding Gallaghers, and not become commercial sell-outs, and not become parodies of themselves. Just carry on, making cool, weird records.
This is Wright's first doc and he brings reverence for the music together with visual flair.  There are so many brilliant jokes in how the interviewees (Bjork, Beck, Katie Puckrick, Flea and sooo many others) are subtitled and how vintage footage is intercut with the interviews. But most of all Wright just has the grace to give this story the run-time it deserves and to give each album its due, no matter whether it was a hit or a bomb. And yes, there seem to have been a lot of ups and downs in their career. The result is that we feel invested in their success and if not their success then their happiness and artistic fulfilment. There's a deeply touching moment near the end where Ron thanks the audience and says that he doesn't take the fans for granted. They really are gentlemen.
THE SPARKS BROTHERS is rated R and has a running time of 140 minutes. It played Sundance and SXSW 2021 and was released earlier this year.
Posted by Bina007 at 13:47