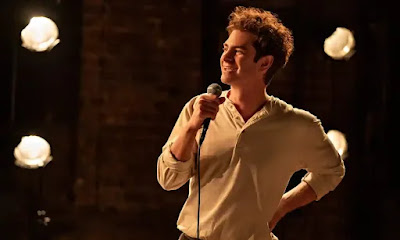 I came to TICK, TICK...BOOM! knowing nothing about its subject, real-life musical theatre composer and performer, Jonathan Larson. I know RENT - his hit show - primarily for its South Park spook, "Everybody has AIDS". So when the opening framing device revealed that Larson died the night before his hit show opened, I assumed it was from AIDS. What an idiot. Two hours later, I learned that Larson died of aortic failure in his early thirties having slaved away at various commercially failed projects, living in a crappy 1990s New York apartment, and generally struggling to hold onto this love of theatre despite the temptations of getting a Real. Job.
That I found Lin Manuel Miranda's movie of Larson's last decade is testament to Andrew Garfield's lead performance. To call it big is an understatement, and for anyone less charming, Larson might come off as an insufferably insecure, selfish attention seeker. In Garfield's hands, one cannot but admire Larson's energy and gregarious good humour even as he suffers crippling self-doubt and ... whisper it quietly... his songs aren't that good. Maybe RENT was though? I shall endeavour to find out.
TICK, TICK...BOOM! has a running time of 115 minutes and is rated PG-13. It was released earlier this year on Netflix.
Posted by Bina007 at 14:46