Anna Karenina is my favourite novel. There are novels that I think are better written, though not many, and those that I admire more. But Anna Karenina has my heart, and I read it typically twice a year. When you love a book so passionately - when you have visualised every scene and every character - it becomes incredibly hard to give another person's vision a fair viewing. And so, in general, I have avoided watching the many film and TV adaptations of the novel*. However, I have recently been rewatching a lot of Greta Garbo's films on my many train journeys to Paris, including her 1935 ANNA KARENINA directed by Clarence Brown. 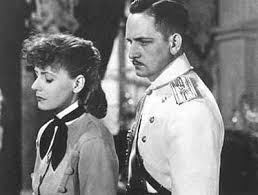 Anna Karenina is a beautiful society woman who's love for her son compensates for her marriage to a staid and self-satisfied man.  She is pursued by the dashing Count Vronsky, and knowing what is at stake, refuses his advances at first. When she gives in she sacrifices her place in society and access to her son.  Worst of all, cut off from the air of society, Vronsky becomes clasustrophobic and Anna becomes insecure and paranoid with tragic consequences. This story is set against that of Anna's sister-in-law Kitty, who's heart is broken when Vronsky leaves her, but is courted by the fascinatingly ill-at-ease, philosophically mired aristocrat Levin.
This movie adaptation is just 95 minutes long and much is sacrificed to get the movie down. The story of Kitty and Levin is given very short shrift, as well as anything more dark and searching in Levin's philosophical quest. This is of particular pain to those who, like me, think that Levin is the true hero of the tale. When it comes to the story of Anna and Vronsky, Garbo is of course, perfectly cast. Her magisterial beauty makes Vronsky's reckless behaviour unsurprising, and her ability to play against that, and show deep vulnerability and doubt, is deeply affecting. It might be a cliché, but in the final scenes, when we see Anna in the extremity of suffering, one can't help thinking that only a silent movie heroine would know how to convey such complexity and depth of emotion as Garbo does.
I also rather like the direction. Brown was apparently Garbo's favourite director and he took her from silent films such as FLESH AND THE DEVIL into her first talking feature, ANNA CHRISTIE and beyond. Of what I'd seen of his earlier films, Brown was not a director with visual flair - rather leaving his camera static to observe a beautifully framed tableaux the better to fix our attention on Greta Garbo's face. But ANNA KARENINA starts with a tour-de-force scene in which he shows Count Vronsky in his element - at a lavish officer's dinner. It isn't a scene that exists in the novel, but perfectly captures the decadence of that era and the capacity for self-indulgence that Vronsky will display. It also foreshadows the tragedy that will occur when Vronsky is cut off from the oxygen of these society events. The officers are tucking in to luscious food, almost like unruly schoolchildren, and then, we realise, this has only been a starter! As they are called to dinner, the officers start singing and line up at a long banqueting table, richly laden with yet more luscious food. The camera tracks back slowly down the length of table, at food rather than officer height, and the effect is powerful and overwhelming. Truly brilliant film-making. This understanding of the fact that much of Russian high society at that time was about creating spectacle carries through into the first ball-room scene, in which a mazurka is staged. William Daniels photography is once again superb, and as we see high society indulging in emotional games in their lavish frocks, there is no mistaking that this is a David O Selznick film with all the MGM glitz and glamour that that entails.
So, there is much to like in ANNA KARENINA - Brown's visuals and Garbo's performance. But for me this can never quite be a great film because of the liberty taken with the text by screen writers Clemnece Dane and Salka Viertel (QUEEN CHRISTINA) and in particular the downplaying of Levin-Kitty as a counter-point to Anna-Vronsky. Doctor007 thinks I am being unfair on this point - and that the movie stands up perfectly well on its own terms. Maybe he is right, but I am far too enmeshed in the novel to be able to make that separation.
*Anglo-Saxon versions began with J Gordon Edwards' 1915 Anna starring Betty Nansen, Edward Jose and Richard Thornton; and Julien Duvivier's 1948 film, produced by Alexander Korda and starring Vivien Leigh as Anna, Ralph Richardson as Karenin, Kieron Moore as Vronsky with a score by Constant Lambert and a score by Cecil Beaton. More recently, Bernard Rose's 1997 Anna starring Sophie Marceau, Sean Bean, Alfred Molina, James Fox and Danny Huston.
Russian Anna's include Tatyana Lukashevich's 1953 version starring Anna Tarsova; Aleksandr Zarkhi's 1967 movie starring Tatyana Samoljlova as Anna; and Margarita Pilikhina's 1974 film, with Maya Plisetskaya as Anna and Alexander Godunov (Karl in DIE HARD) as Vronsky. German Anna's include Friedrich Zelnik's 1919 Anna starring Lya Mara and there are versions from France, Italy and Hungary from the silent era.
ANNA KARENINA played Venice 1935 where it won the Mussolini Cup for Best Foreign Film (shudder) and was released in 1935 and 1936.
Posted by Bina007 at 22:04