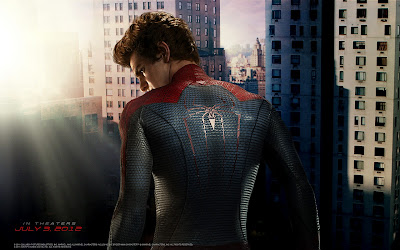 To state the obvious, there is no need for THE AMAZING SPIDERMAN to exist other than that Sony needed a superhero movie for their 2012 production slate. A mere ten years after the critically and commercially successful Sam Raimi revamp is too soon for a reimagining.  And director Marc Webb ((500) DAYS OF SUMMER) seems to acknowledge this with has artistically cowardly retread of Raimi's first film.  There are superficial differences.  Andrew Garfield's Spidey is more emo and Method than Tobey Maguire's.  There's no Daily Bugle. Emma Stone's slightly bored-looking Gwen Stacy is substituted for Mary-Jane Watson. But a lot of the beats of the film - the individual scenes - seem to safely restate what was established by Raimi, especially in its first hour which retells the origin story.

In the second half of the film, Spidey tries to investigate the death of his parents - an event taken for granted in Raimi's version.  Apparently papa Spidey was a genetic scientist - a fact that sits oddly with me. I had always thought Spiderman was compelling because he was a blue collar hero, battling small-time crime, in sharp contrast to his better educated more moneyed superhero peers such as Batman.  Anyways, it is what it is. Following the trail of his father's research leads Spidey to Dr Curt Connors aka the Lizard (Rhys Ifans) - a pretty weak two-dimensional villian more from a cheap pantomime than a modern superhero movie.

The best I can say about the new Spiderman is that it's pretty harmless. And I guess it would've been to much to have expected a genuine reboot along the lines of Nolan's Batman.  Maybe my disaffection stems from the fact that Sony seems to be pitching this film at a younger audience than the typical superhero fare.  There are just too many juvenile jokes - Spidey shooting web at a guy's crotch - Spidey using his superpowers too skateboard better - Spidey biting on FOOTLOOSE in the boat-yard -  for me to take this film seriously, no matter how Method Garfield goes.

THE AMAZING SPIDERMAN is on global release.
Posted by Bina007 at 21:24