SEEKING A FRIEND FOR THE END OF THE WORLD 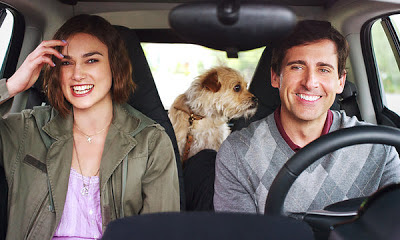 SEEKING A FRIEND FOR THE END OF THE WORLD is a boring, tonally uneven, miscast mess. Which is a shame, because writer/director Lorene Scafaria's previous flick, NICK AND NORAH'S INFINITE PLAYLIST was a genuinely funny, sweet rom-com with an awesome soundtrack.  Maybe it was helped by it's simple conceit - two kids go on a road trip to see a band play a secret gig.  By contrast, SEEKING A FRIEND is hamstrung with a really bizarre conceit that the director clealru doesn't know how to handle: the world is going to end in three days when an asteroid hits the Earth.

The rom-com implication of the end of the world is that Dodge (Steve Carrell) goes on a road trip to find his college sweetheart, aided by his neighbour, Manic Pixie Dreamgirl Penny (Keira Knightley). Naturally, despite the fact that he's a boring insurance salesman and she's, well, a Manic Pixie Dreamgirl, he's going to fall in love with her en route.  This storyline doesn't work. Prim and proper Keira Knightley can't sell Manic Pixieness and she has no chemistry with Carrell, who basically looks like her father. Plus, the whole kooky rom-com vibe is totally offset by the disturbing background of looting and survivalists. I mean, can we really root for Penny when she abandons her boyfriend (Adam Brody) to a crowd of violent looters?

SEEKING A FRIEND FOR THE END OF THE WORLD is currently on release in the USA, Canada, Croatia, Slovenia, Israel, Ireland, Poland and the UK. It opens on July 19th in Russia, July 26th in Hungary, August 2nd in Singapore, August 8th in France, Greece, the Netherlands and Iceland, August 17th in Lithuania, August 20th in Bulgaria, August 23rd in Australia and Estonia, August 31st in Brazil, September 6th in Hong Kong, September 14th in Mexico and Turkey, September 20th in Germany, September 27th in Portugal, October 18th in Chile and November 7th in the Philippines.