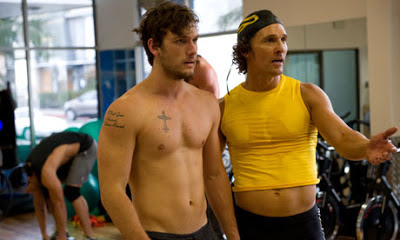 MAGIC MIKE is a much hyped film about a male stripper who wants to escape the business, all the while inducting a young kid into the same exploitative game. Based loosely on male lead Channing Tatum's own experiences, the movie has an authentic eye for the details of the business, but also a blind eye for the seedier aspects of the game.  We see Mike's young protege fall into drug use and strip club owner Dallas (Matthew McConaughey) exploit both Mike and The Kid. But the griminess of the business, the gay subculture, the violence of the drug trade aren't shown.  Rather we get a warm-yellow-toned world of buff guys banging hot chicks, living in cool lofts, with a nice redemptive character arc. This truly is Disney does Strip Clubs just as Strip Clubs give men and women a safe fantasy environment.

Where the movie works best is in showcasing Channing Tatum's easy charm as the jovial "elder brother" figure to The Kid and the suitor to the kid's sister. Even when he disses the bank for refusing him a loan, he gets the best lines.  Steven Soderbergh is also at his best in directing, editing and photographing these causal scenes of intimacy, taking us back to his indie roots.  Matthew McConaughey gets the "Tom Cruise in Tropic Thunder" role - the outlandish, cartoonish svengali who is utterly at peace with his world, and the movie creates minor tension by leaving it till the end to show him stripping.  As for Alex Pettyfer as The Kid, it's a pretty anonymous performance.

But taken as a whole, I found the movie rather wearying.  There were too many stripping routines, The Kid's descent and Mike's redemption were too obviously mapped out. The whole thing tdo sleek and easy and long.  I couldn't help but think that there was a cracking 95 minute movie inside this flick's 120 minute running time.

MAGIC MIKE is currently on release in Georgia, Russia, Canada, Estonia, Lithuania, the USA, Thailand, the Philippines, the UK, Ireland, the Netherlands, Portugal, Iceland and Poland.  It opens on July 20th in Norway; July 26th in Australia and New Zealand; August 3rd in Greece, Israel and Romania; August 9th in Hungary and Singapore; August 15th in Belgium, France, Sweden and Germany; August 23rd in Denmark; Finland on September 7th; Italy on September 21st; Hong Kong on September 27th; Spain and Turkey on October 5th; Brazil on November 2nd; Taiwan on November 9th; Mexico on November 23rd and in Argentina on January 3rd 2013.
Posted by Bina007 at 21:00