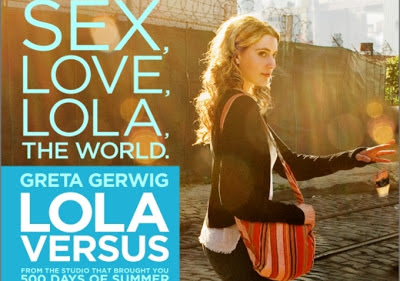 LOLA VERSUS is a mediocre drama about a twenty-something girl living in Manhattan and how she fails to cope with being dumped by her fiancé. This rather predictably includes trying to sleep with her male best friend, resenting her female best friend when she gets together with him, and basically having all sorts of questionable sex.  I didn't mind that Lola was rather self-absorbed and unlikeable - because that's what people who've just been dumped are like.  I did, however, object to the rather thin characterisation and any kind of witty one-liners.  It says a lot about Daryl Wein and Zoe Lister Jones' (BREAKING UPWARDS) rather earnest, lacklustre script that even the charming Greta Gerwig (DAMSELS IN DISTRESS) can't bring it to life.

Maybe there's something even more fundamentally wrong here?  Even though I have big issues with Lena Dunham's output, there's a way in which when her characters talk about sexually transmitted diseases and hate sex it has the ring of painful truth which is sadly missing in LOLA VERSUS. There's a sense in which we believe in twenty-something angst because we see the characters literally bare themselves in demeaning relationships.  There's none of that willing self-abasement here.

LOLA VERSUS played Tribeca 2012 and opened earlier this year in the USA. It opens in the UK this weekend. It opens in Turkey on September 7th, in Russia on September 20th, in Estonia on October 5th, in France on November 28th and in Germany on December 13th.