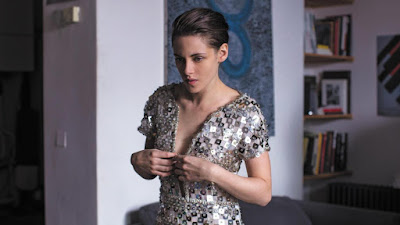 When I was at university, essays were graded on the greek alphabet.  There was a unique grade for work that was simultaneously brilliant and terrible - uniquely provocative but failing to answer the question - and that grade was an "Alpha-Gamma".  Well, dear reader, I feel we just found the first Alpha Gamma film of this year's London Film Festival.

So let's start with the Alpha.  Kristen Stewart follows her amazing performance in Olivier Assayas' last film - THE CLOUDS OF SILS MARIA - with arguably a career-best performance here.  She plays Maureen - a young woman grieving for her twin brother who died of a heart disease they both share.  It turns out that they were both mediums and that she is convinced she has to wait in Paris to receive a sign from him. This would be almost laughable were it not for the way in which Stewart utterly commits to the role and convinces us of her complete inability to move forward. She is trapped her desire to hear from him, and this desire makes her vulnerable to signs, visions and - as it turns out - a cyber-stalker.

Now for the Gamma.  I don't feel that Olivier Assayas is in control of his material, and that some critics (and evidently the Cannes jury) have given him the benefit of the doubt as trying to deliberately create mystery or ambiguity.  In fact, he has created a film that switches tone and resolves mysteries and issues with an abruptness that borders on the absurd.  The film works best when depicting Stewart as a kind of shadow - walking through the life of her famous employer, picking up her designer clothes and jewels.  I also rather liked the spectral visions.  But the thriller plot is just risible - I felt this wrapped up so quickly and obviously as to have the movie jump the shark.  It never recovered for me.  I also feel that there is something conceptually flawed in having a central conceit that the stalker converses with Maureen via iMessage.  It just felt so banal that I couldn't believe it was sinister. And to be honest, watching someone read and respond to texts for 30 minutes is about as interesting as it sounds.

So, watch PERSONAL SHOPPER for Stewart.  But don't watch it for plot.  If you want a COMPLETE movie about a central character unable to move beyond grief, also featuring a superb central performance but within an entirely brilliant movie, check out MANCHESTER BY THE SEA instead.

PERSONAL SHOPPER has a running time of 105 minutes and is rated 15. The film played Cannes, where the director won the Best Director prize jointly with Cristian Mungiu for Graduation. It also played Toronto and London 2016. It opens on December 14th in Belgium and France; on January 19th in Germany; on January 26th in the Netherlands; on January 27th in Austria; on February 2nd in Russia; on March 3rd in the UK and Ireland; and on March 10th in the USA.
Posted by Bina007 at 21:44