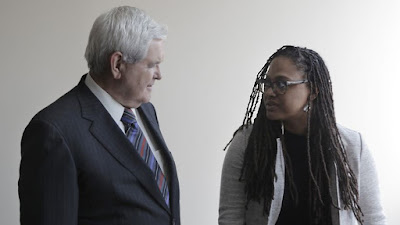 Ava DuVernay directed the award-winning feature film about Martin Luther King, SELMA, and she returns to our screens with this documentary, backed by Netflix, about the way in which the US criminal justice system is oppressing black men.  Her documentary's central thesis is that when slavery was made illegal with the passing of the 13th amendment to the US constitution, a crucial clause within that amendment made an invidious exception - one could still be enslaved if a convicted criminal.  The thesis is that this exception has been exploited by the establishment to keep the black man subjugated, and that every superficial step forward in the civil rights struggle has been accompanied by a concomitant but increasingly subtle repressive force.  So, when the 13th amendment freed the Southern states' workforce, the police started arresting black men for trivial crimes in order to take advantage of their labour.  And in order to justify the incarceration, the establishment had to create the myth of the animalistic, savage Black man - a danger to decent white folk, and particularly their women.  It is this image that was so brilliantly and hatefully propagated in D.W. Griffiths' THE BIRTH OF A NATION - a film that revived the Ku Klux Klan.  But it's after the repeal of Jim Crow that the rates of incarceration really jump - and this documentary argues that this is a direct consequence of Nixon's Southern Strategy to win the votes of now alienated white working class Southern voters by recasting appeals to their racism as a platform of law and order.  In other words, rather than going after the black man directly, go after criminals, knowing that those groups can be depicted as one and the same thing.  in a final twist, the documentary argues that big business is now in on the act - that mass incarceration has created a new market for private companies to make profits, but only if they receive a steady stream of inmates.  The result is a corporate backed lobby group proposing legislation that ensures rising incarceration rates and disproportionately impacts young black men.  Worst of all, most will never see a trial because they will opt for a plea deal rather than risk mandatory minimum sentences.

All of these arguments will be highly familiar to any reasonably well-read liberal, and I've been reading tragic articles exploring all of these strands for years in the New York Review of Books.  But there's something highly valuable in having DuVernay put together a concise primer for the massive audience that is potentially there on Netflix, with its release timed to coincide with Netflix releasing her feature film, SELMA. The documentary is highly polished and features an impressive cast of experts giving their testimony - from Havard professors to formerly incarcerated activists to the iconic political prisoner and academic Angela Davis. I found Newt Gingrich particularly impressive as a sensible and sound man of rare insight.

There are, however, a couple of things very wrong with this documentary.  First off, I do wonder how far knowing your film has been designed primarily for the small screen, and indeed the mobile device, rather than big screen.  A couple of times DuVernay used grainy archive footage which was so highly pixellated it was a struggle to watch it - but which may well look just fine on a small screen.  Second, and of more concern, was the lack of balance or critical voices.  Occasionally, we see a champion of the anti-progressive view, but they are given precious little screen time.  The result is a documentary that has a sound thesis but which comes across as agitprop.  Third, and I must confess this comes from someone who uses statistics in argument for a living - I hated the key graphic that showed the jump in the number of prisoners every decade. What you ACTUALLY need is the change in the proportion of US citizens incarcerated, because the absolute number going up could just reflect population growth.  I know this probably isn't the case, but it struck me as sloppy argumentation. Finally, my real problem with the documentary was what it didn't say - and what it left unexplored.  DuVernay rightly spends a lot of time examining the repressive regimes of Nixon and Reagan, and the shockingly bad consequences of Bill Clinton's 1994 crime bill. But then we somehow fast forward to the current election and the Black Lives Matter movement. Shouldn't we have unpacked and explored the impact that having a Black President had on incarceration rates? I found this silence strange and troublesome.

So, I didn't really learn anything from 13th, which is not to say it might not still be a valuable documentary.  But it struck me that the positive impact of the highly impressive cast of interviewees were somewhat mitigates by a sloppy use of stats and selective examination of different president's records.