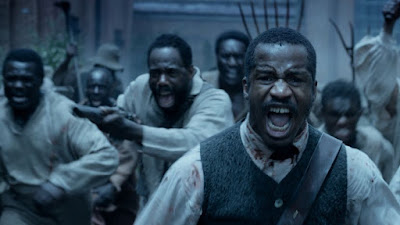 THE BIRTH OF A NATION is a film that comes to us laden with controversy. And while I tried to watch it and assess it purely on its own terms, for reasons I will go on to explain, this was impossible. Accordingly, it’s hard to defend this as an objective review of a work of art - rather, it’s a summation of my thoughts on the work and its political context.

THE BIRTH OF A NATION is itself a provocative title for a film. It refers, of course, to D.W.Griffiths’ film, released a century ago. That silent film told the story of a noble Southern family who suffered during the Civil War, and a protagonist who joined the Ku Klux Klan to keep his sweetheart safe from the ravening predatory bestial freed slaves. The film - which I watched earlier this year at the BFI Southbank - is disturbingly good. Like watching a good production of Wagner’s Ring, you find yourself swept up in the artistry and carried along in a wave of emotion in spite of your awareness of the noxious political beliefs held by the creator and woven into the fabric of the work. In the case of the Griffiths’ film, the infamous presidential review - that it is “history written in lightning”, holds true. The images of gallant knights riding to rescue fair maidens of burning crucifixes - of a young heroine jumping to her death to avoid rape - these remain potent symbols. Great art moves people and BIRTH OF A NATION moved them to join the KKK and cemented and exacerbated prejudices. It’s simultaneously a technically brilliant and horrifying film.

In calling his directorial debut, THE BIRTH OF A NATION, Nate Parker is clearly signalling that he is trying to re-frame black history and re-claim it from white propagandists. It’s a noble cause. But it also sets a high bar - where you will be judged by whether you are historically accurate and balanced in contrast to the twisted racism of the prior film.

How does Parker’s film measure up against this self-imposed benchmark? In a sense, very well. The focus is firmly on the black characters and the broad strokes of the story of Nat Turner’s slave rebellion and broadly true. He was indeed a young slave who was literate and religious and had visions of being a prophet and leader. He did indeed believe that his slave rebellion was part of a holy crusade against the forces of evil on earth. But he was not motivated into action by the savage rape of his wife (although rape of slaves must have been a real part of his feeling of the deep injustice of slavery). And he didn’t hand himself in when the rebellion failed to save other black people from being lynched in his place - rather, he was discovered in hiding and then tried and hung.

But THE BIRTH OF A NATION is by no means a balanced or nuanced film. Characters are mono-dimensional. Slave-owners are evil, often alcoholic, rapists. The only exception is Nat Turner’s mistress, who is a almost holy devout woman, suffering in silence. The black characters are also given very little nuance or depth. They are good, earnest victims of violence - interchangeable except for the violence they suffer. The house-slave is characteristically portrayed as sycophantic to white people, but I actually thought his arguments against the rebellion to be sound. But we will not be allowed to see them that way because this is a deeply emotionally manipulative film that wants us to see Nat Turner as a messiah figure.

Now it’s clear that the historical Nat Turner DID see himself as a messiah figure. But should this movie accord him that same honour? In Nate Parker’s view the answer is a clear yes. He is presented from the opening scenes as a mystical chosen one. When he is whipped by his master he is seen arms stretched on a cross-like wooden crossbar. When he dies, righteous angels welcome him into heaven. But wouldn’t it have been far more interesting to examine him as a real man? To have interrogated the idea of his messiah complex? To have asked whether massacring 60 white men, women and children (something the movie is careful NOT to show, because that would tarnish the image of its hero) was worth the lives of the 200 black people who lost their lives in reprisals, and the repression of black assembly that then followed? What precisely did Turner hope to achieve, carrying no arms and having access to no arms, other than martyrdom?

Sadly, THE BIRTH OF A NATION does not have the moral courage to give us a balanced view of the Turner rebellion. Maybe it’s too soon for that. Maybe it’s enough that the pendulum of imbalance swings back from white to black? But I feel that the political and moral landscape of this film is actually quite simplistic and a definite step back from morally more interesting films such as 12 YEARS A SLAVE. And needless to say, while this is a well enough made film, it does not have the artistic flair or technical brilliance of 12 YEARS or indeed DJANGO UNCHAINED.

Finally, perhaps one might review this film without addressing the controversy around its director, writer, producer and star, but I think that would not be an honest reflection of my experiences watching this film. Try as I might I could not separate the controversy from the film. This is because, almost from the first scene, we are presented with a Nat Turner that seeks to protect a beautiful but abused woman from violence. He is then forced to watch both his wife brutally raped, and then another slave given owner to a house guest. It is that rape that is seen as a prime motivator for the rebellion. The fact that Parker is the actor portraying the character who is defined by his desire to protect women from sexual violence, makes it incredibly hard to watch this film objectively. At any rate, I would understand if someone reading this could not take it as an objective review

BIRTH OF A NATION has a running time of 120 minutes and is rated R.  The  movie played Sundance, Toronto and London 2016. It was released in the USA on October 7th and will be released in Germany on January 19th, in the UK and South Africa on January 20th, in the Netherlands on January 26th, in France on February 1st and in Australia on February 2nd.
Posted by Bina007 at 22:01